Kimbra at Webster Hall in 2012 (more by Chris La Putt) 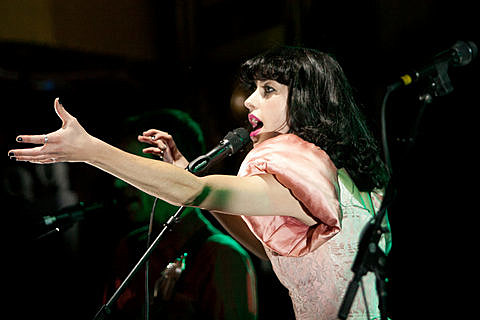 Kimbra quickly escalated from only being known (in the US) as the other singer on that Gotye song to someone who could headline some pretty large rooms. She's now set to release her first album since that newfound success, The Golden Echo, on August 19 via Warner Brothers. The album was produced by Rich Costey (The Shins, TV on the Radio) and features contributions from The Mars Volta's Omar Rodriguez-Lopez, Dirty Projectors' Dave Longstreth and others. It's already spawned four diverse singles, which you can listen to below.

Kimbra will support the new record on a tour with NYC art pop singer Empress Of that hits Empress Of's hometown on November 6 at Bowery Ballroom, a smaller place than Kimbra's last headlining show here. Tickets for that show go on sale Friday (7/25) at noon.

Kimbra - "Nobody But You"