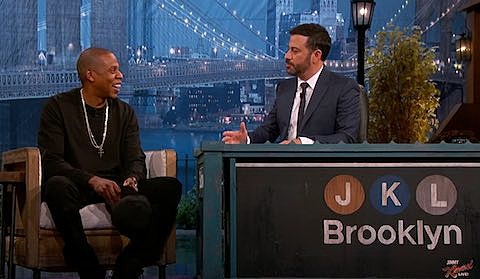 Jimmy Kimmel has been doing his ABC talk show live from Brooklyn Academy of Music this week which has involved a whole bunch of high-profile stunts. On Tuesday (10/20) he and guest Jay Z walked the entire audience to the star-studded TIDAL concert at nearby Barclays Center, and last night for "Back to the Future Day" (10/21/2015, maybe you heard something about it) Michael J Fox and Christopher Lloyd showed up, in character and in a Delorean. Jimmy updated Marty and Doc on what did and didn't actually get invented by 2015. Last night's show also had presidential hopeful Bernie Sanders on, who (in response to last week's Saturday Night Live cold open) did his best Larry David impression. Video of all that is below.

The show also remade Park Slope's Two Boots into Sal's Pizza from Do the Right Thing. Perhaps that will tie into Friday's musical guest Public Enemy, whose "Fight the Power" was the film's theme song.