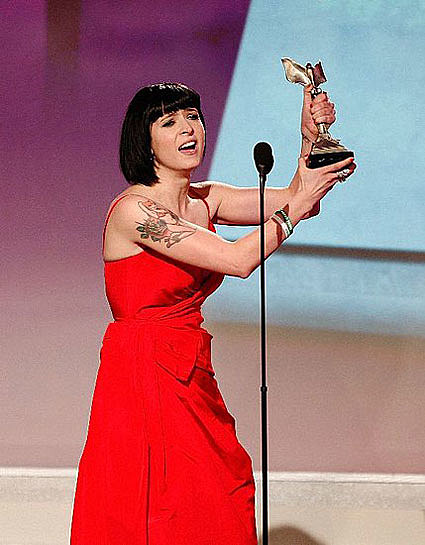 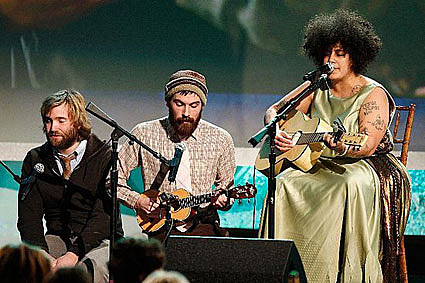 Quirky comedy drama Juno has triumphed at the Independent Spirit Awards, winning a total of three awards, including best film.

The annual ceremony is seen as a warm-up for Hollywood's big show on Sunday night, the Academy Awards.

Juno beat The Diving Bell and the Butterfly, I'm Not There, A Mighty Heart and Paranoid Park to the top prize.

The film is also nominated for four Oscars, but is considered a long shot to take the best film honours.

Writer Diablo Cody won the Independent Spirit award for best first screenplay and is up for original screenplay at the Oscars.

Accepting her award, Page said: "This is all Diablo Cody's fault.

"She wrote one of the best screenplays I have ever read and created a teenage female lead I feel like we've never seen before.

"I got to work with some amazing actors who all poured their hearts into this film because we all believed in it so much."

Director Jason Reitman said the film had been "a treasure" to work on.

A heavily pregnant Blanchett won her best supporting actress award for her role as Bob Dylan in the rocker's biopic I'm Not There.
She dedicated her award to co-star Heath Ledger, who died following an accidental drug overdose last month.

I'm Not There also took the first ever Robert Altman Award - named after director Robert Altman who died in 2006 - for a filmmaker, casting director and acting ensemble.

Director Todd Haynes also paid tribute to Ledger, saying receiving the award without him was "bittersweet".

"He never left the set - I think he was really interested in watching the process of film-making and how we were going about it.

"He offered great suggestions too, all of which I used. I have no doubt he would have made an astounding director."

Speaking after receiving her award, Blanchett also played down her best actress and best supporting actress Oscar chances by joking with journalists.

Other winners included Philip Seymour Hoffman, who took the best actor award for The Savages. He is nominated for the best supporting Academy Award for Charlie Wilson's War.

The film cost just £80,000 to make, and went on to be a huge hit at the Sundance Film Festival.