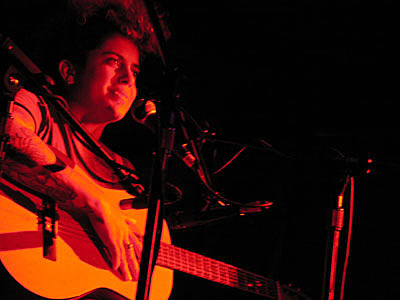 Kimya Dawson will be in Brooklyn August 17th for an intimate show at The Pyramids (32D South 1st St), a space also known as South 1st Studios and formerly known as Glasshouse. Also on the bill are No One and the Somebodies, TURBOSLEAZE, Pablo Das and Only Son. The show is at 7pm, all ages, no advance tickets ($10), and the space fits about 200. It's part of a short tour for Kimya that includes a house show in Baltimore and a gig in Philly.

Also at the Pyramids is a show a few days earlier on August 12th with Eternal Summers, Reading Rainbow (who have shows with Dum Dum Girls and Crocodiles coming up), Rescue Bird, German Measles and Family Trees (who have a 7" out for the song above, with a video below). That show is $8.

Tour dates and videos are below...