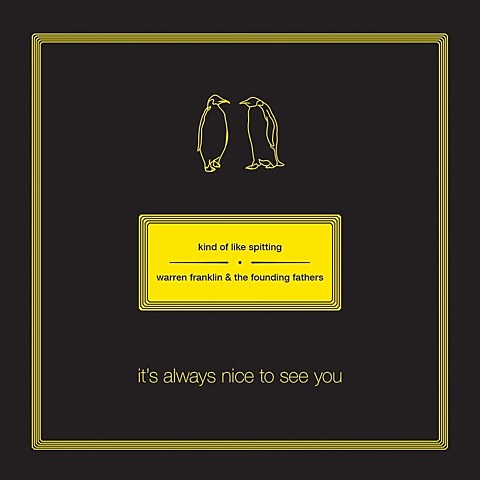 Ben Barnett brought back Kind of Like Spitting once again last year, and now, joined by his current lineup of Brian Grant (bass) and Dante Johnson (drums), he's releasing a split full length with a newer band that combines indie pop and emo, Warren Franklin & the Founding Fathers. Like a handful of other comparatively older bands in this style -- Braid, The Jazz June and The Velvet Teen for example -- KOLS have teamed up with Topshelf Records for the album. It's called It's Always Nice to See You and due out on February 3.

Two KOLS songs are already out and can be streamed below, and the new Warren Franklin single, "Can't Be Subtle," makes its premiere in this post. It's a nice dose of the kind of power pop-inspired alt-rock that the '90s were so full of, more jangly than crunchy, and Warren's voice is really nice for this kind of thing. Listen below.

As discussed, Warren Franklin & the Founding Fathers are heading out on a tour with Empire! Empire! (I Was A Lonely Estate), which will have Empire! Empire! playing their 2009 debut in full in honor of its upcoming reissue. That tour hits NYC on February 6 at Palisades. Tickets are still available.

Full list of dates, with the song streams, below...