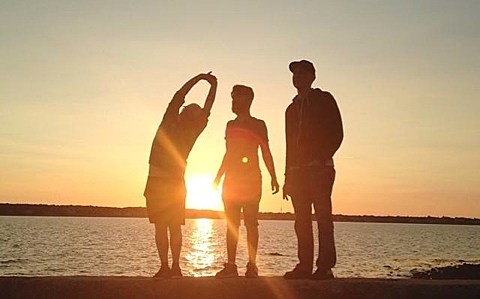 Recently reunited indie/emo veterans Kind Of Like Spitting put out their latest effort, a split LP with Warren Franklin and the Founding Fathers, with Topshelf Records last month. Stream the album in full below.

Kind Of Like Spitting's tour with The City On Film and Lee Corey Oswald kicks off tonight (3/25) in Denver and winds its way around the US before closing out in Seattle in April.

We're giving away tickets to the Chicago and NYC shows, which happen at Beat Kitchen on 3/27 and Studio at Webster Hall on 4/1, respectively. NYC is also with Living Room. Contest details below.

KOLS' Ben Barnett is also set to play a solo set with Rocky Votolato and former Vivian Girl Cassie Ramone the night after the full band NYC stop at Suburbia on April 2. That show doesn't have any advance tickets, it's $10 at the door.

All Kind Of Like Spitting dates, giveaway details and a stream of the split LP, below...

* - no City on Film or Lee Corey Oswald