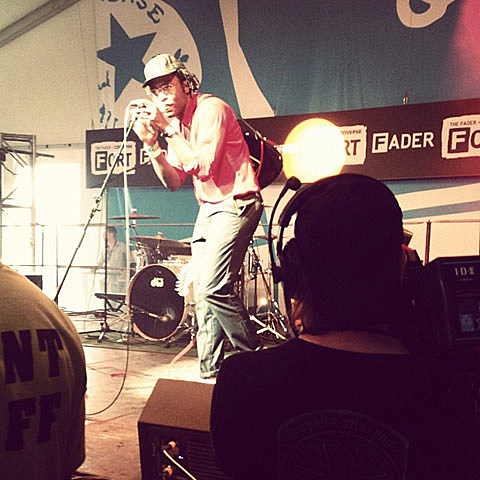 Blood Orange (aka Dev Hynes), who was just in Austin for SXSW (picture above, video below), is back home in NYC and will play a local show at Justice's favorite club Lit Lounge TONIGHT (3/21) with Rewards and Shuga. Tonight's show is one of a few one-offs for Blood Orange before he heads out on tour with Florence & the Machine. That tour hits NYC on May 8 at Radio City (sold out).

Rewards, who open tonight's show, were also added as an opener to Tanlines' upcoming Bowery Ballroom show (4/12). Tickets for that show are still available. Tanlines were also just at SXSW for a limited amount of shows and released their album, Mixed Emotions, yesterday. Alon with that came a new video for song "All of Me", directed by Julian Barratt of The Mighty Boosh. Watch below.

Shuga, who are also on tonight's bill and were also at SXSW, are on Luv Luv Luv Records, who are presenting tonight's Lit Lounge show and who also manage Blood Orange and Florence, who as mentioned, are touring together. Shuga has another upcoming NYC show at Tammany Hall on Monday (3/26).

In related news, Kindness (aka Adam Bainbridge), who, like Blood Orange, records for Chris Taylor's (of Grizzly Bear/CANT) Terrible Records, was also just in Austin for SXSW where he shared a bill with Blood Orange at a Windish party. Kindess also played a Gorilla vs Bear/Yours Truly party and the NME showcase, among others. Dummy Mag wrote about the GvsB/YT show:

Kindess slinked on stage like the consummate crooner: smooth, self-assured and safe in the knowledge his charm would woo the crowd. He was right, too. I was a little too tired to surrender to it entirely but there's no doubting the calibre of Kindess. Top of the pops.

Check out some videos of Kindness at SXSW below.

Speaking of Gorilla vs Bear and Florence & the Machine, GvsB just premiered a Clams Casino remix of Florence's "Never Let Me Go." Stream that below.

All dates, videos and streams below...

Tanlines - All Of Me