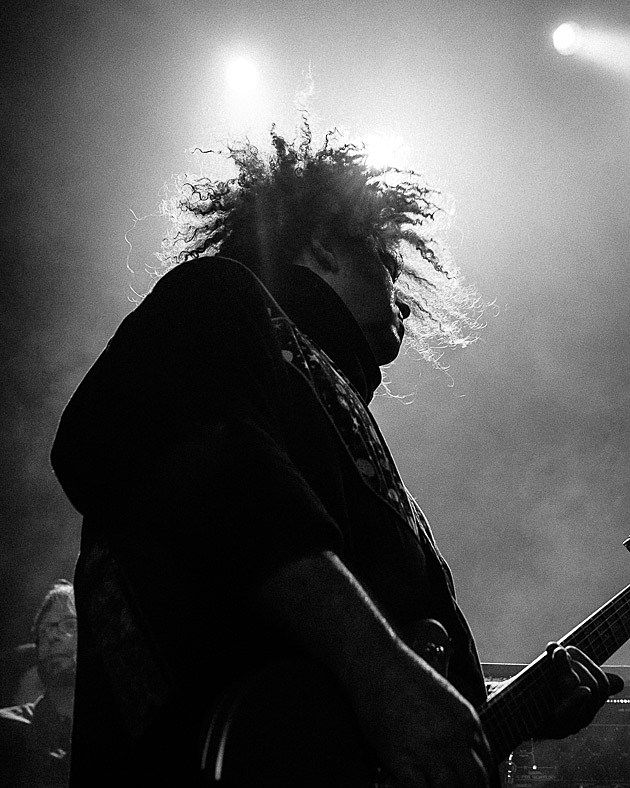 Richard "King Buzzo" Osborne, frontman/guitarist for the Melvins is now streaming his new solo outing, This Machine Kills Artists, in full. The record (not to be confused with the new Scion AV split with Tweak Bird) is a departure from his recognizable stew of slow sludge, booming doom, and Kiss-riffs twisted into a nightmare. Instead of punk distortion overload, This Machine is simply Buzz and an acoustic guitar, recorded straight to tape, string rattle and all. It will be released by Ipecac on June 3. Then, Buzzo will hit the road for a long tour.

That said, it would be a mistake to think This Machine lacks heft. While opener "Dark Brown Teeth" is a Richie Havens-esque strummer containing beautiful, haunting singing pulled from '70s power pop, there are long passages where the collection gets unnervingly dark. When I caught Buzzo at the Scion Rock Fest, I was surprised by the force of his impact. I wrote:

He yelled, growled; hammering the same gut-bucket progression past flushness. His grey hair spun out in spirals, whipping the air. He was Woody Guthrie in a nightmare. The audience watched reverently.

It was but a man and his guitar, but his charisma, keen sense of melody, and focus kept a crowd of antsy metalheads facing the stage during his set. This Machine isn't any different. Its sub-three minute songs, while raw, are full of surprises.

In related news, after a Kickstarter campaign dating back at least two years, The Color of Noise, the documentary tracking the history of Amphetamine Reptile Records will be seeing a debut shortly. Began by Tom Hazelmyer in 1986, the Minneapolis label catered to the burgeoning noise rock scene, releasing records by Melvins, the Jesus Lizard, Helmet, Tar, Today is the Day, and many, many more that have achieved a cult following. Its legacy lives on today, influencing third and fourth waves of noisy bands best described as having that 'AmRep' sound. The film will premiere May 30 at Third Man Records in Nashville, Tennessee and features many talking heads ranging from Steve Austin, Derek Hess, John Stainer, and, yep, King Buzzo.

What The Color of Noise trailer and a clip of the flick, along with the This Machine Kills Artists stream and those dates again (Santos Party House and The Wick included), below...