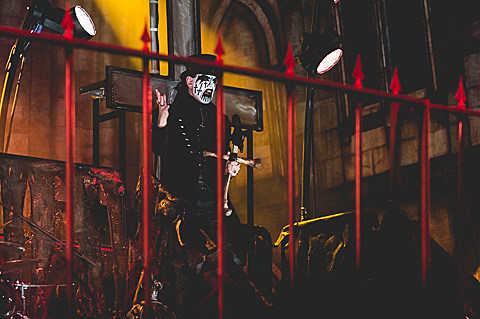 King Diamond begin their NYC run with Exodus this week (11/19-21) at The Playstation Theater. Friday and Saturday are sold out, but tickets for Thursday are still available. King Diamond will be playing their classic album Abigail in full all three nights.

In exciting related news, King Diamond guitarist Andy LaRocque recently gave an interview to Neil Turbin where he revealed that King Diamond are working on a new album, which would presumably happen in 2016 and would be their first since 2007. Here's an excerpt (via MetalSucks):

We are going to have a little break after this tour, and after that break we are going to start writing music for the next album.

So it's still in the early stages, but that's something to get excited about! Watch the full video interview, and check out the updated list of tour dates below...