Like Gawker, Stereogum, and Largehearted Boy before me, I thought this King Dork blog book tour thing was a cool idea. The following guest post is part 4 of a 5 blog series by Andrew Krucoff... 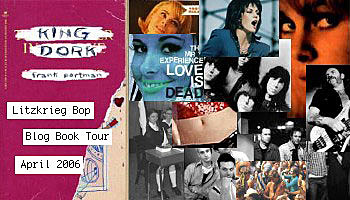 Frank Portman (Dr. Frank of the Mr. T Experience) is the author of King Dork, a story that revolves around Tom Henderson (a.k.a. King Dork, Chi-mo, Hender-fag, and Sheepie) who is a typical American high school loser until he discovers his deceased father's copy of The Catcher in the Rye, which will change the world as he knows it. He soon finds himself in the middle of several interlocking conspiracies and at least half a dozen mysteries involving dead people, naked people, fake people, ESP, blood, a secret code, guitars, monks, witchcraft, the Bible, girls, the Crusades, a devil head, and rock and roll. And it all looks like it's just the tip of a very odd iceberg of clues that may very well unravel the puzzle of his father's death and reveal the secret to attracting semi-hot girls. Early reviews are here and here. Welcome to the King Dork blog book tour, previous stops include Gawker, Stereogum, and Largehearted Boy.

Now we move on to the musically-reclined Q&A section, but unlike previous days, we literally mean one Q and one A in this case. Don't worry though, it's a doozy one-two suckerpunch.

In several of the book's scenes, high school sophomore Tom Henderson (a.k.a. King Dork, Chi-mo, Hender-fag, and Sheepie) watches horror movies with the tv volume down but the stereo up. Creature Features include: Invasion of the Body Snatchers with Taking Tiger Mountain (By Strategy), Rosemary's Baby with Sabbath Bloody Sabbath, and Evil Dead II with Rattus Norvegicus. Oddly, you don't mention any such connections in the book, but do you have some Wizard of Oz/Dark Side of the Moon-esque revelations to share?

You know, I didn't actually test this out. But let's try. Sabbath Bloody Sabbath with Rosemary's Baby, starting now!

Man, I never realized till now how much that dual warped-guitar solo sounds just like you're going up in an elevator to look at an apartment. Spooky.

Mia Farrow's smile is really freaking me out in a whole new way.

During the line "God knows as your dog knows," Guy makes a joke about marijuana and slaps Rosemary's butt on the word "dog."

Oh wow, Guy and Mr. Nicklas are trying to lift the mysterious piece of furniture just as "National Acrobat" begins.

And now Rosemary and Guy are starting to do it at the precise point where the guitar solo begins.

This post-solo riffage actually works great as a soundtrack to all the guys rolling out the rug and bringing in the furniture.

I'll say this: the laundry room scene is way more touching with "Fluff" playing over it. You'd almost think Rosemary and Terri Gionnoffrio are going to start to make out or something. They are looking at each other very tenderly. But no, now Rosemary is making out with Guy again.

Christ, how long is this song? OK, now it's over.

Another great moment: the "Sabbra Cadabra" riffs kick in just as Minnie and Roman come walking down the street.

Ruth Gordon is onscreen quite a bit now: it almost sounds like the song is about her. Is there some kind of Ozzy and Maude thing going on here?

Now it's "Killing Yourself to Live" and I have this sudden mental image of Chuck Klosterman. Unfortunate. Yet it is so cute how Rosemary can't quite manage to cut her meat while she discusses Catholicism with Roman Castavets.

Now Rosemary is taking off her stocking, but nothing special happens during "Who Are You?" In other words, she's not getting the Ruth Gordon treatment at all.

Another nice scene: we hear "everyone just gets on top of you/the pain begins to eat your pride" as Rosemary turns to watch Guy walk away after learning that Donald Baumgart has gone blind. She looks exactly like a woman whose pain has just begun to eat her pride. Now Hutch is gesturing with his pipe and it almost looks as if he is saying "looking for today" over and over. Guy taps the calendar in the outro. (Get it? Calendar - "Looking for Today"... Kind of heavy handed.)

The dream sequence actually works pretty well with "Spiral Architect" but the album ends about halfway through it, just as Rosemary's clothes are being removed. If you stop there, it's kind of an uplifting ending. "I look upon my earth and feel the warmth and know that it is good." It has a "love is all around, you're gonna make it after all" vibe. We never get to the guy in the devil suit and "this is no dream this is really happening."

I'm not sure what to make of all this, but I'm sticking with the theory that Sabbath Bloody Sabbath is a coded audio mash note to Ruth Gordon. Check it out yourself: it's pretty obvious once you notice it.

::: Frank performs a previously unreleased song from the book, "Gooey Glasses" (acoustic). Thanks for coming out, everybody.