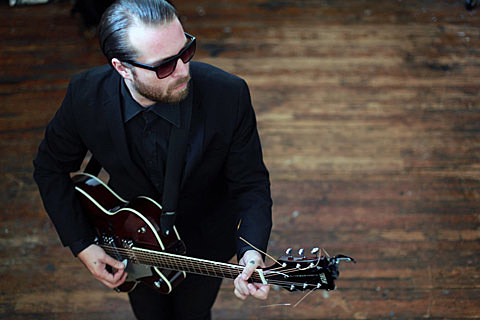 King Dude "will be playing his first show with an accompanied band" TONIGHT at Home Sweet Home (4/11) as part of the ongoing Wierd Wednesday at the venue. The show is a one-off for the gothic crooner, who is also scheduled to play Chaos in Tejas in Austin with Iceage Xeno & Oaklander, Pop. 1280, Kindest Lines, Dangerous Boys Club, Anasazi, RØSENKØPF, and YOU.

King Dude released the Love LP last year and is prepping the new "You Can Break My Heart" b/w "Devil's Tail" 7", a new LP due this summer, and a split with the mighty Urfaust soon. Stream all of Love below.

In other news, RØSENKØPF have released a new song from their self-titled debut for Wierd Records. Stream "Burning Spirits" from that record below. Look for RØSENKØPF to play NYC next on 4/20 at Acheron with Puerto Rico Flowers (ex-Clockcleaner, their final show), Anasazi and York Factory Complaint.Catch RØSENKØPF in July when they open for Iceage at one of their two just-announced NYC dates.

All streams are below.