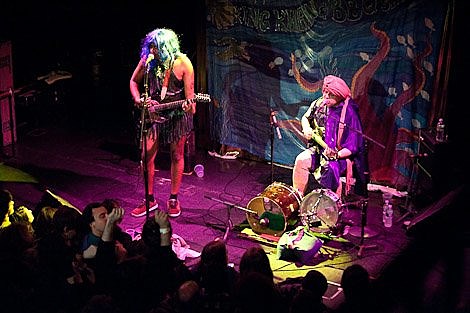 It's hard to take any King Khan news 100% serious. And like many dysfunctional couples, just because King Khan and BBQ are "broken up" doesn't mean they might not get back together. That said, here's the story...

Laurie Anderson's concert for dogs in Sydney Australia was part of the Vivid Sydney Festival, which she and Lou Reed curated. Acts they brought included Holly Miranda, Emily Haines, Boris, Doveman, Marc Ribot and Dave Hidalgo, My Brightest Diamond, Melt Banana and, a favorite of Laurie's, the King Khan & BBQ Show, whose two shows at the fest did not go smoothly. What happened at their gigs isn't exactly clear, but it's been all down hill since an argument after the second one. The blog Rockaliser Baby has details on the group's canceled June 19th show in Seoul, where more drama went down. That was to be the last of three shows in South Korea (they "successfully" performed two nights before in Daegu). Between those posts, King Khan's account of their Australian shows and Mark (BBQ) Sultan's version of the story on the band's Facebook, you could spend an afternoon catching up on everything that happened.

Mark Sultan is currently recovering from the disastrous trip in Cambodia, and though no official statement has been made (except maybe by Mark Sultan in a comment hidden far down on his Facebook wall), all signs point to the group being broken up.

The duo are currently still on the schedule for Sled Island in Calgary June 30-July 1, where King Khan is one of the curators, but the band doesn't have any upcoming dates listed and they did officially cancel other dates (like September 28 at Neumos).

It's not the first time the band has had trouble on the road - most recently, in 2009, their tour manager was arrested mid-tour, forcing them to cancel some shows.

And King Khan made news (TMZ included) earlier this year when he showed his ass to Lindsay Lohan after an Almighty Defenders (a group BBQ is also in) show at Cannes.

No video from these shows in Australia or Korea (yet), but clips from their set at Primavera Sound at the end of May is posted below...