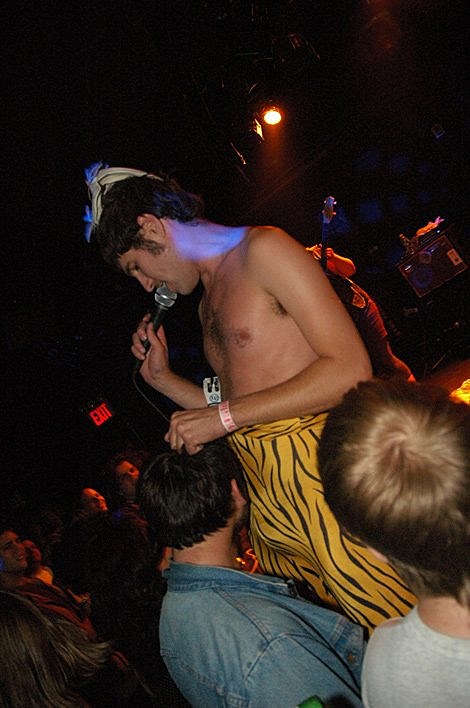 Hunx and His Punx will bring their zebra-stripe undergarments and trouser snake to NYC on Saturday (10/16), where they'll team up with The Babies + K Holes for night of sexy at Cake Shop. The east coast date is their only live date.

Hunx & His Punx's last show on 10/10 was billed as their "last California show of the year" and featured BBQ (Mark Sultan) on the bill. This time Hunx will go head-to-head with the one-man-band who will bless Mercury Lounge that same night with Two Tears (tickets). The Mercury Lounge show is an early one though (show at 8:30), so with some luck you should be able to catch both BBQ and Hunx & His Punx (doors at 8, and three bands). Cake Shop is right around the corner from Mercury Lounge. More BBQ dates HERE and below.

If you do opt for the double-header on Saturday you will most likely miss all of BBQ's ex-partner-in-crime (literally?) King Khan, as King Khan & the Shrines will be playing Bell House with Live Fast Die that same night (tickets). So if you need your dose of turbans and zebra-prints, then at least you can catch King Khan at Santos the night before (Friday, 10/15) (tickets) with Gentleman Jesse & His Men and Golden Triangle. All dates below.

Golden Triangle will be busy in the coming couple of weeks as well, playing two CMJ shows in addition to their previously discussed support appearance with Crocodiles at Maxwell's on 10/29 (tickets). Look for the band to play the Hardly Art show at Shea Stadium on 10/21 with Woven Bones, Circle Pit, La Sera (aka Katy Goodman of Vivian Girls & All Saints Day), and Xray Eyeballs in addition to a 10/22 show at Live With Animals with Human Eye, Greg Ashley Band, and TV Baby. Full Golden Triangle dates are below.

None of these dates will feature Red Mass, who recently played NYC x2 in addition to a string of dates with King Khan. But Red Mass will also be in NYC next week, playing Arlene's Grocery on 10/21 as part of the M for Montreal showcase featuring Random Recipe, The Luyas, Uncle Bad Touch, PS I Love You & Radio Radio. The show is Red Mass's lone US date, and Bill will soon have much more to say about this show (stay tuned).

Full tour dates and some NSFW video is below..