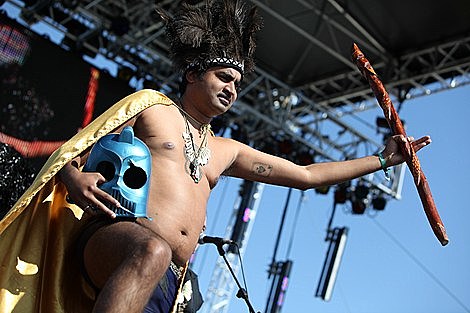 The Almighty Defenders CD, out September 22nd on Vice, brings together the Black Lips, King Khan and Mark Sultan. The latter two make up King Khan & the BBQ Show, which is the band that'll be playing Brooklyn's Bell House this Halloween (its an early show - 7:30pm doors / over by 10:30pm) (there's a TBA late show at the same venue). Prizes for best costume. As you can see above, King Khan already has some ideas in mind. Tickets are on sale now.

Can't make it Halloween? King Khan and BBQ are also playing Bowery Ballroom one night earlier (10/30). Ticket info TBA. Full tour dates are still forthcoming, but there are a few more below (including November 1st in Philly). They'll be touring in support of the new King Khan & the BBQ Show album, Invisible Girl, out November 3rd on In the Red.

Another Halloween NYC gig happening in Brooklyn is the Mount Eerie metal show at the Market Hotel. His tourmates, No Kids and Tara Jane O'Neil, will also be his backing band for a set that promises "2 drummers, some gongs and a wall of amps." Liturgy is one of the bands on the bill. Another will be Malkuth. That tour formerly had a TBA for another NYC show. That will happen (with No Kids & TJO playing sets too) on Sunday, November 1st at (Le) Poisson Rouge. Tickets for that Manhattan show (which does not include Liturgy or Malkuth) are on sale (Market Hotel doesn't have advanced tickets).

The LPR show is put on by Wordless Music, who has a bunch of big shows coming up (not the least Rhys Chatham's A Crimson Grail on Saturday). There's also Warp20NYC, the Wordless series at Columbia's Miller Theatre, Deefhoof and Why?.

The Market Hotel show is curated by Brandon Stosuy - music writer and organizer of Show No Mercy (that Black Bubblegum co-curated this past Sunday). Tonight (August 5th) Brandon will be be presenting from his "in-progress oral history of American black metal [briefly excerpted at Believer] joined by Matt Luem for "Joe's Pub's Happy Ending Reading & Music Series. Also at the event will be "Rachel Cohen reading from her book A Chance Meeting: Intertwined Lives of American Writers and Artists. And Lawrence Weschler reading from his work on the visual artists David Hockney and Robert Irwin. And Colin Stetson delivering an opening invocation on saxophone. And Buke & Gass playing a short set of clear voiced yet fuzzed out pop experiments on homemade instruments." Tickets are still on sale.