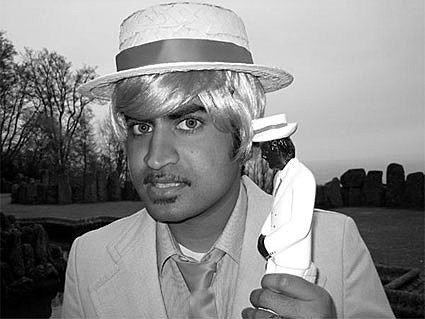 "Tonight you can catch the first ever US performance of the spectacular soul sensation King Khan and The Shrines and his 9-piece live extravaganza. What can you expect from this Indian-Canadian-German shaman of showmanship? Costumes, dancers, horns, Stax, Stones, Nuggets, farm animals, pillow cases, James Brown, Sun Ra, completely unnecessary nudity, and crazy awesome addictive songs. How must one appropriately prepare for a live King Khan show? Read his own words below when Exclaim Magazine asked him the same question....

EXCLAIM: How must one appropriately prepare oneself for a live King Khan show?

KING KHAN: Rub raw onion and basil all over your body. Oh shit, that is how to get rid of scabies! I would say fill your pockets up with cash to throw onstage. I once went to a strip club in Atlanta and a stripper asked if I was from a band and when I said Yeah, she said that if I had some music she would go up and dance. I ran and got the King Khan & BBQ Show CD from the car and they played Shake Real Low and then two black strippers started doing buttsnaps on stage and going all out. As if that wasnt ridiculous enough, the girl I was with named Jessica Jugs (she is South American) got so excited that she just ran up and started taking her clothes off in front of the stage on the floor. She got completely butt naked and all the ballers with golden teeth rolled to the front and showered her with money. Best day of my life! Wait, what was your question again?

King Khan and his Shrines are also playing a free show at McCarren Pool on August 3rd with Black Lips and Deerhunter AND a show one day before that at Mercury Lounge (no tickets yet). All dates below....