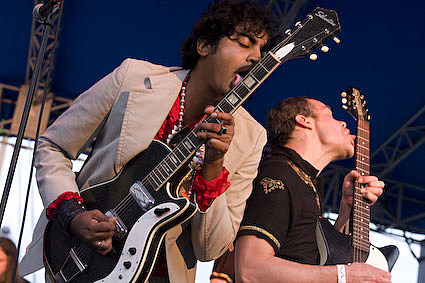 If you don't know by now, King Khan basically releases music and tours with two separate soulful garage rock projects. There is the simpler, punkier King Khan and BBQ Show, and the more complex (9-12 members) and psychedelic King Khan and the Shrines.

BBQ, when not calling himself BBQ or one of many other pseudonyms, goes by his real name Mark Sultan. And when not playing with KK or with one of his other bands, or running his own label, he is out performing solo. In the past year, KK & BBQ (in all their various incarnations) have been touring, and performing plenty in NYC. And King Khan has been showing up on stage with his friends almost anywhere he happens to be when he isn't playing himself. Each and every time he leaves people talking about his crazy antics and outfits, probably more so than about the music itself. Regardless, it's usually a good time (if you let it be).

We will get a taste again this May when King Khan and the Shrines hit the road with Mark Sultan for an east-to-west coast tour that currently includes three NYC-area shows. Tickets are on sale for all of them: Music Hall of Williamsburg in Brooklyn on May 1st, Maxwell's in Hoboken on May 2nd, and Santos Party House in Manhattan in May 3rd. The tour will be in support of their 2007 album "What Is?!" that "is finally getting a proper domestic release on April 21" via Vice Records.

King Khan & the Shrines are also playing some dates in the South in March (they were supposed to play Langerado) which then turns into their previously-announced tour-to-SXSW with Golden Triangle. All dates below...