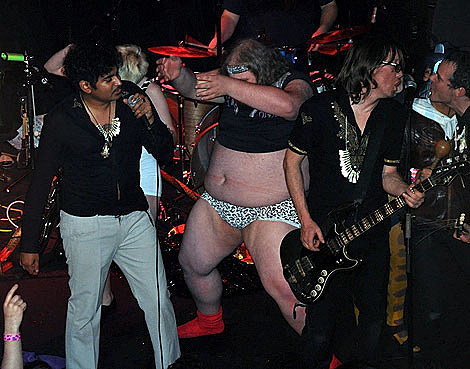 King Khan and the Shrines played Music Hall of Williamsburg in Brooklyn last night (5/1), and as if King Khan doesn't already provide enough eye candy, the one and only Darren Mabee showed up to make things even more interesting. According to one message I got, there was a "naked fat bearded guy onstage wearing nothing but a cape." which was followed by "He's actually wearimg a leopard speedo thong, but appeared nude bc the fat rolled over the speedo! He has girls lathering him w baby oil also."

You can catch King Khan again tonight (5/2) at Maxwell's, and Sunday (5/3) at Santos Party House. All dates HERE. A video from last night's show below...

And here's one of BBQ from the earlier Phillyt show:

and here's something more official: