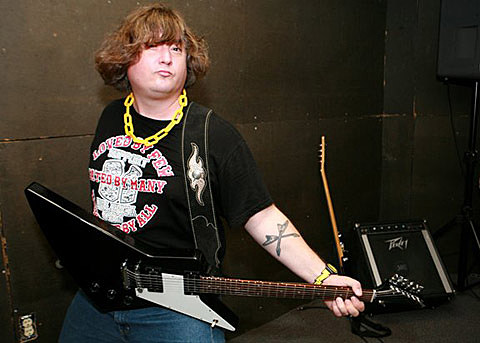 King Louie Bankston (born Louis Paul Bankston) is a prolific garage punk musician from Harahan, Louisiana. He is best known for his work in The Royal Pendletons, The Persuaders, The Exploding Hearts, and The King Louie One Man Band.

King Louie Bankston will bring his band Missing Monuments to NYC for a show at Cake Shop TONIGHT (11/28). They'll lead a bill that will also include appearances from Night Birds, Ex Humans and Pretty Quick. The show is part of a round of dates in celebration of Missing Monuments' new LP Painted White, which is streaming in full at Facebook and out now via Douchemaster Records.

The show is one of TWO dates in NYC scheduled for Night Birds, who will also play ABC No Rio with Citizens Arrest, Mind Eraser, The Inflatable Children and Death First on December 17th.

12/17 is turning out to be an insanely busy day with ABC No Rio during the day time and night shows from both the sunsetting Defeatist at Death by Audio and a just announced show with Montreal's Omegas, The Boston Strangler, Mauser, and Creem at 538 Johnson.