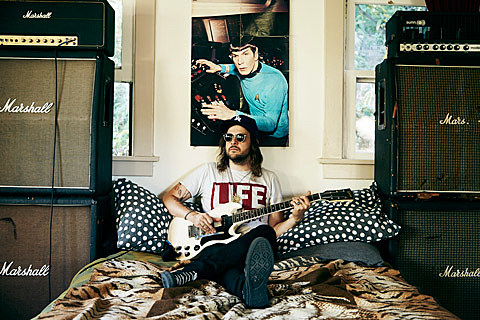 King Tuff's third album, Black Moon Spell, will be out September 23 on Sub Pop. Main man Kyle Thomas made the album with producer Bobby Harlow at Burger Records' all-analog Studio B and it features an appearance by Ty Segall, who plays drums on the album's title track. You can stream the Zeppelin-ish "Eyes of the Muse" from the album, and read some of Kyle's notes on the LP, below.

All tour dates are listed, along with album art, tracklist and song stream, below...

It was produced and recorded by Bobby Harlow at Studio B in Los Angeles, California, in the hot winter of 2014.

No one involved was prepared to make a record, but an invisible hand pushed them to do it. Perhaps it was God or that special someone we all know and love called The Devil.

God and The Devil actually have very similar interests. They both love electric guitars and they both want you to listen to Black Moon Spell and freak the fuck out.

There were many strange occurrences during the recording session - Dracula landlords, flashes of mysterious light, haunted microphones, songs that mixed themselves, demonic vortexes swirling in coffee cups, etc.

Fire played a very important role in the making of this album. King Tuff loves fire.

For some reason, no one can really explain how the Black Moon Spell came to be. It just appeared one day and demanded heavy rock music and meatball subs.

Backwards messages may be found on this record.

Los Angeles, full of its screaming coyotes and creeping helicopters, surely slathered its sexy, twisted, hairy, polluted spirit all over Black Moon Spell. The Sunset Strip shat itself when it heard all these guitar solos.

Alot of people always ask King Tuff when he's gonna put out a new record. The answer is September 23, 2014.

Can you feel the Black Moon Spell creeping up the back of yr neck yet?

King Tuff would prefer not to tell you the full story of making this record because its long and crazy and you wouldn't believe him anyway. Also, I am King Tuff.

Magic Jake, who played bass and is beautiful like sunshine, would like to take this moment to give you a hug and invite you to a tanning party on a beach of your choice.

Old Gary, who plays drums and has the most glorious cackle, would like to take this moment to crack a cold one with you and invite you to watch the old ballgame with him.

Old Gary was out watching the old ballgame, so a wild critter named Ty Segall played drums on the song "Black Moon Spell." Ty enjoys speaking in a goblin voice in his spare time.

Night fell on Studio B. A Tarot card leapt from the deck and said, "No human judgement is of any value here." King Tuff agreed.

Sub Pop first discovered King Tuff curled up in his palace in Vermont. It was basically a shit hut made of moss, mud, and glimmering stones hidden near the graveyard, and it was guarded by beautiful wild bullfrogs with silver fangs and baseball bats.

Every song on Black Moon Spell was written without giving a shining fuck about nothing.

Listen to Black Moon Spell and give yr ears what they've been begging for all year; a heavily weird, heavenly dark, hysterically magical Rock & Roll Sexperience.

-ps. the only part of this story that isn't true is the part about the shit hut. I actually was living at my parents house when i was discovered. Love, KT