"When are you gonna post about The Kings Of Leon shows?" - Anonymous

"kings of Leon a band best known for their haircuts and getting pooped in their mouths and then walking out on their audience- there, how's that for a post" - Anonymous 2

my eye! (Kings of Leon @ Outside Lands) (more by Vincent Cornelli) 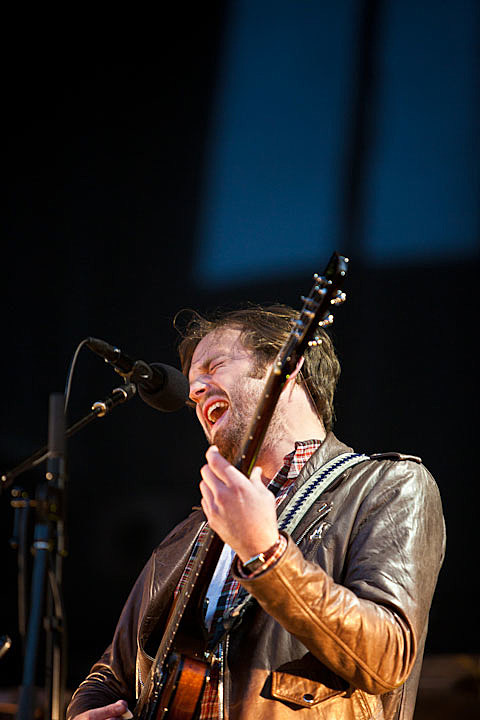 "Pooping pigeons forced the Kings of Leon to abandon their St. Louis, Missouri, concert after just three songs [on a Friday night in July], the rock band's management said [the next day].

An infestation of the birds in the rafters of the Verizon Amphitheatre bombarded the musicians as soon as they took the stage, according to Andy Mendelsohn of Vector Management.

Fine! Kings of Leon have a new album called Come Around Sundown coming out on October 19th, and since the band is huge, they will be supporting that album with three huge east coast shows a month later. And those are:

Tickets for the Live Nation-produced MSG show will go on general sale Saturday, October 2nd at 10am. Tickets for the Bowery Presents-produced NJ show go on sale at the same time. Both shows cost $59.50, and open their doors at 6:30pm.

The MSG show also lists a Fan Club Ticketmaster-based presale beginning Thursday at 10am. I assume the NJ show will have the same.

I also assume that more dates will be announced, both in NYC and NJ (if these do well), and elsewhere in the United States. But for now the only other dates are overseas.

UPDATE: It is worth noting that Kings of Leon went back to St. Louis this past weekend and played a free show to make up for the pigeon fiasco. I didn't realize that when I first posted.

All dates, with video from the pigeon poop show, below...