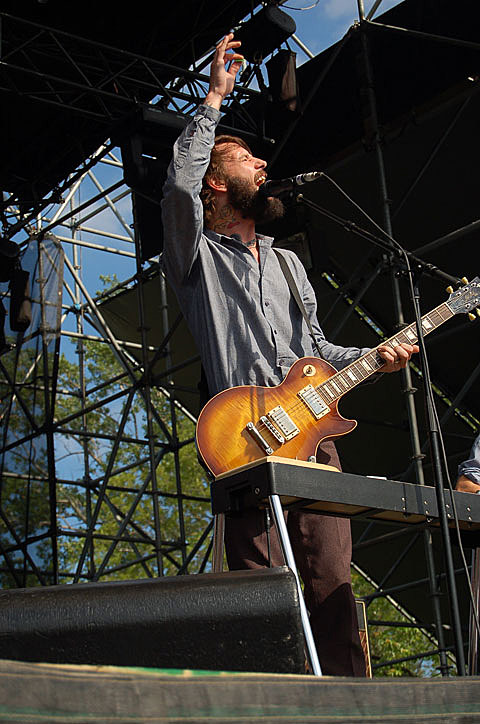 As you may have heard, Caleb Followill of Kings of Leon walked off stage at their show in Dallas, TX on Friday (7/29) after saying he was going to go backstage, vomit, and return for three more songs.

"While KoL's fans stood in the dead heat, precious Caleb was carried off to his all-white dressing room where slaves hand fed him Evian ice cubes and fanned him with swan feathers while spritzing his face with 60º Perrier from a crystal bottle." [Dlisted]

Caleb never returned and Jared Followill then told the crowd, "I don't know what to say. It's not our fault. It's Caleb. He can't play." Jared then tweeted, "Dallas, I cannot begin to tell you how sorry I am. There are internal sicknesses & problems that have needed to be addressed. No words." Jared again tweeted, admitting, "I love our fans so much. I know you guys aren't stupid. I can't lie. There are problems in our band bigger than not drinking enough Gatorade." The band continued to cancel their next two shows, both Saturday (7/30) and Sunday (7/31). Since canceling those dates, the band have gone on to cancel the rest of their entire tour, which was with Band of Horses.

We are so sorry to say Kings of Leon are canceling their entire US tour due to Caleb Followill suffering from vocal issues and exhaustion. The band is devastated, but in order to give their fans the shows they deserve, they need to take this break. Unfortunately, the US dates cannot be rescheduled due to the band's international tour schedule. Tickets will be refunded at point of purchase. Tickets purchased online or via phones will be automatically refunded. The band will resume touring in Canada at the Rogers Center in Vancouver, BC, on September 28th. That show was originally schedule for September 14th.

Nathan Followill confirmed it's just a break and not a breakup, when he tweeted "Bummed about the tour not happening. So sorry 4 all the fans. We just need some rest. Thanks 4 understanding. WE ARE NOT BREAKING UP!" Despite the fact that the band reports the tour was cancelled so Caleb could rest his voice, US Weekly reports that a source tells them his bandmates are urging him to go to rehab. The source says Caleb "drinks like a fish."

Fortunately, Band of Horses are working on scheduling some club dates to make up for the cancelled tour. They wrote on their facebook:

Hey there Friends Of BoH! First off, we're sorry for the lag on updating everyone. We're thrilled by all the support you're showing us, and have been working behind the scenes to do everything we can to come see you. Unfortunately, we won't be able to hit up all of the places we'd planned on visiting with Kings of Leon. BUT!!! We're happy to announce that we're going to play SOME SHOWS!!!
We're playing FT. LAUDERDALE AND CHARLOTTE THIS WEEK! Details are below. We're working on adding more, and will have another update very soon.
We would like to thank Kings Of Leon for the opportunity to play the shows we did, and wish them all the best.
p.s. We're hoping to provide a special treat to the fans coming out to these new dates. Stay tuned and thank you!
Love, BoH

The new dates include a show at Hammerstein Ballroom on August 10 (which is at least way better than Jones Beach). Tickets for the NYC show go on sale Friday (8/5) at noon.

BoH also wants you to help them pick their setlists for the new shows. Because they had planned on playing shorter sets of their more popular songs on the Kings of Leon tour, they now have time to play some of their lesser known cuts. Check out the list of songs to choose from and more details on how to submit your choices at their facebook.

Video of Caleb speaking throughout the Dallas show and ending with Jared's apology, and Band of Horses dates below...