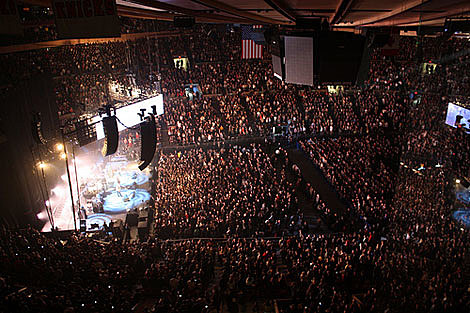 Coldplay frontman Chris Martin has revealed that people often mistake him for singer James Blunt or an insurance salesman. The singer said a woman who works next door to the band's Bakery recording studios in London is convinced that he is a door-to-door salesman. "She asked me the other day if I was in insurance," he told XFM. "And if it's not insurance or a lawyer, it's another singer. "The other ones I get are James Morrison and James Blunt and I always say, 'Yep!' because you should never disappoint somebody." Martin joked that he would rather be confused for Kings of Leon frontman Caleb Followill. "If I could sing like that I'd be massive," he said. [Gigwise]

The Whigs opened for Kings of Leon at the sold out show at Madison Square Garden in NYC last night (1/29). KOL's setlist below...

Is that setlist correct? If not, do you know the right one?