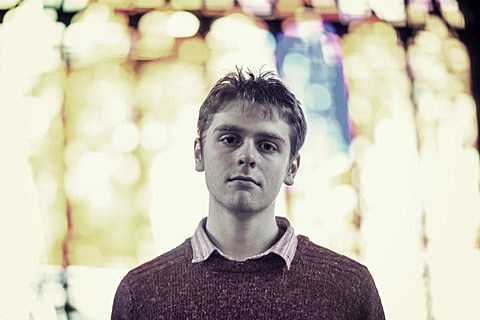 Last year, Manchester singer-songwriter Kiran Leonard released Bowler Hat Soup, an exceedingly assured debut, filled with momements both lovely and loud. It was all the more impressive considering Leonard was 17 upon its release. If you're unfamiliar, you can stream it below. Coinciding with his first proper UK tour, Leonard has released a version of "Geraldo's Farm" from the album that was remixed by Peter Brewis of Field Music and The Week That Was. Says Peter:

I've managed to ruin pieces of music before, but they're generally been my own - remixing takes this anti-skill of mine to a new level. Anyhoo, although I did almost as much deleting as I did recording (it's pretty minimal) I had lots of fun doing it and realized a lifelong ambition to do a track that includes an 'I feel for you' pastiche hi-hat part. I also couldn't bare to leave the recorder/penny whistle stuff out so I utilized them as a break-down solo.

Brewis adds some complex drumming and a lot of synthesizers, giving the song an entirely new flavor. You can stream the "Geraldo's Farm" remix, and listen to the original and a live version, in this post.

As for playing North America, no word yet. But all UK tour dates are listed, along with streams (all of which are pretty different), below...