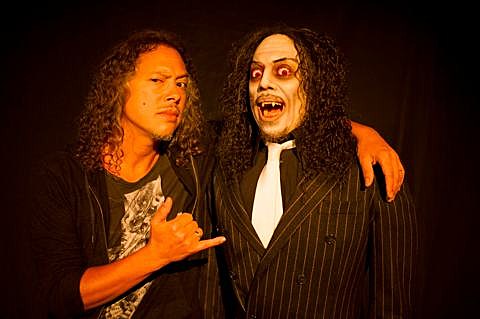 Combination horror-film/heavy metal culture festivals curated by aging thrash icons: they're a thing now. Last year brought us the inaugural edition of Phil Anselmo (Pantera)'s Housecore Horror Festival, which was excellent by all accounts. This year, we get Metallica guitarist Kirk Hammett's Fear FestEvil (see what he did there?) at San Francisco's Regency Ballroom from February 6 - 8. Early-bird tickets are on sale.

The fest will split its time between celebrity panel discussions, including both movie-biz types like prominent zombie-makeup man Gregory Nicotero and big-name rockers like Slash, and actual metal performances from (mostly) long-running bands: Carcass & Exodus on Friday (2/7), and Death Angel, Orchid, and Death Division on Saturday (2/8). Metallica fans no doubt recall that Hammett got his start playing guitar with Exodus. He'll be offering those fans some nod-and-wink service by joining Exodus on guitar during their encore at the festival. Oddly, he'll do the same with Death Angel after their set, though he doesn't have the same history with them. On the other hand, the West Coast thrash bands of that generation have always been an incestuous bunch -- Exodus guitarist Gary Holt is effectively a full member of Slayer now too.

Rewind to the beginning of thrash history with Exodus's very first demo (featuring Hammett on guitar), plus a promo video for Fear FestEvil, below: