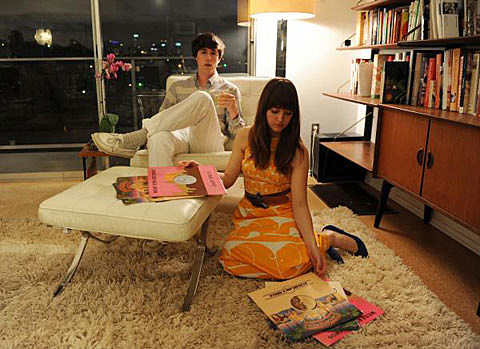 Los Angeles pop duo Kisses, Jesse Kivel (of the band Princeton) and singer/keyboardist Zinzi Edmundson (and a drummer live), are coming to New York for the first time for CMJ. Their shows for that include a Tuesday, October 19th IAMSOUND showcase at Santos and a Saturday, October 23rd show at Arlene's (a Forcefield PR/Windish show). For the Santos show, Men, Salem (last seen at Milk Studios) and Restless People are also on the bill, and tickets are on sale.

I guess that the Santos show will be Kisses' defacto album release gig, since their debut, The Heart of the Nightlife, comes out the same day on This Is Music.

With Kisses, the first thing to note is Kivel's bass-heavy, sometimes-loungey voice (basically unchanged from his singing with Princeton, if you know that). Its sound, combined with the music's '80s-nostalgia, compares favorably to Jens Lekman. Like Jens, Kivel has an ear for retro sounds, which he arranges variously as Muzak-inspired ballads, Arthur Russell disco burners and funk jams (one song, "Midnight Lover," could be on the new Chromeo, including its killer kicker of a chorus "I would like to take you out for a nice steak dinner"). The lyrics have a (slightly put-on) lonely-upper-crust perspective, and play between earnest and ironic (the words are supposedly inspired by a stint Kivel had writing reviews of holiday destinations he never visited).

I caught the band at what (unknown to me then) was their second show ever at the Echoplex in Los Angeles the night before FYF Fest. I partly wound up there because on my way through San Francisco, I saw the the members of Kisses blown up huge on the cover of the free weekly SF Bay Guardian, a really strange amount of pre-any-live-show buzz for the band's still TBA show there in November.

At the Echoplex, they played second on a four-band bill before Hawnay Troof and Stereo Total. The jitters were pretty obvious, though the band sounded good with their hard-hitting drummer and ample help from their programmed backing track. There's no problem with using a backing track, per se, but it was just a bummer to have some of the best hooks - a marimba run, a frantic Hammond solo, their defining bass pulse - played by a faceless laptop. The crowd got into it by asking questions, respectfully answered, between songs. "You guys are good!" blurted one person, almost incredulously, before asking when the record came out.

They'll have some more time to work out the show on the fly with October gigs in the UK and Japan. Until the record, there are two singles (with remixes) you can check out now.

Live videos from those first two shows, an official music video for their single "People Can Do The Most Amazing Things" (one of the record's least dancey songs) and all tour dates (LA, NYC, Japan, and Europe twice) are below.

Kisses - (Official Video) People Can Do The Most Amazing Things 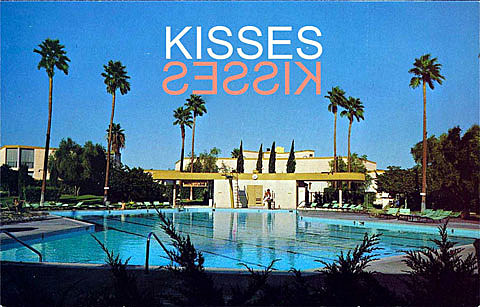 'The Heart of the Nightlife' tracklist
1. Kisses
2. Bermuda
3. People Can Do The Most Amazing Things
4. On The Move
5. The Heart Of The Nightlife
6. Lovers
7. A Weekend In Brooklyn
8. Midnight Lover
9. Women Of The Club