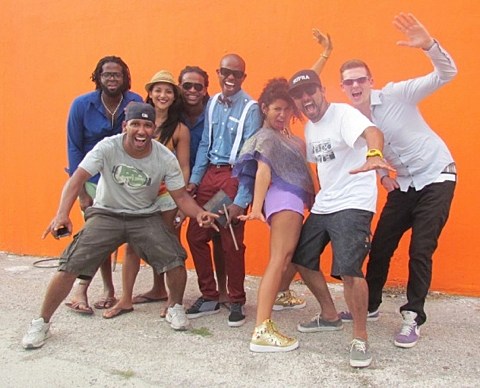 There are plenty of bands that have tried to do the "traditional music remixed with electronica" thing and truthfully, many of them kind of suck. But KiT pulls it off extremely well, with a zero-cheese approach and an electronic sound that manages to be organic, raw and heavy all at once. The band's most recent single is "Jackhammer," featuring a bubbling beat with Dutch house synths, baile funk-influenced drum fills and dancehall vocals, and it could easily become the global bass hit of the summer. [MTV Iggy]

KiT (aka Kuenta i Tambú) hail from Curaçao and the mix the traditional Caribbean music style Tambu with modern day electronic styles resulting in what they call "tambutronic." Their recent single "Jackhammer" does this in a super fun way, and like the review quoted above opines, does so "with a zero-cheese approach." Watch its video below.

KiT are in NYC this week to play globalFEST at Webster Hall on Sunday (1/12) with a ton of different performers from around the world (sold out), but you can catch part of the group much sooner than that. They'll DJ with live vocals in Brooklyn at Baby's All Right TONIGHT (1/9) with Cookies and Tropic of Pisces. Show starts at 9 and they go on around midnight.

UPDATE: Check out a picture from the Baby's All Right show!