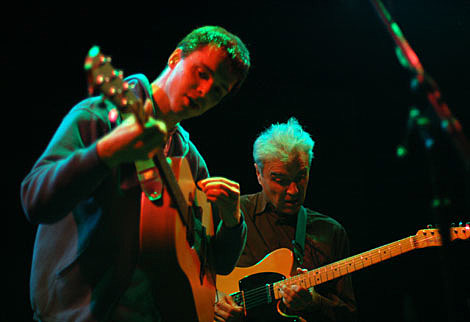 The MoMA Party in the Garden benefit with Karen O and Nick Zinner is tonight (5/25), and the Anthology Film Archives benefit with Lou Reed, Sonic Youth and Kenneth Anger's band Technicolor Skull was the week before (5/19).

Tomorrow (Wednesday, May 26th), there's the spring benefit for the Kitchen, a nonprofit performance and music space in Chelsea, that will honor David Byrne. The event, which includes dinner, drinks, etc. at Capitale (130 Bowery), will also feature performances by Dirty Projectors, Doveman, Nico Muhly, and St. Vincent. Tickets for that would have run you $500 a piece, if they weren't already sold out. Byrne isn't listed as playing at the event, though he has performed with both Dirty Projectors and St. Vincent in the past.

You can still nab a ticket ($75) to the somewhat less-exciting after-party with DJ Scott Campbell and music from California county-tinged folk-pop band Chief.

While in town, Chief, who just signed to Domino Records (and who live back in California now that they've graduated from NYU) are also playing a show at Mercury Lounge on June 2nd with She Keeps Bees and Caveman. Tickets are on sale. They'll also be at Union Pool on June 5th...

"California 4-piece Chief, comprised of early 20-somethings Evan Koga, brothers Danny and Michael Fujikawa and Mike Moonves, will release their stunning debut album Modern Rituals on August 17, 2010. The newest signing to Domino Records, Chief has already garnered a fervent following in NYC and LA as well as early radio support from KEXP, BBC Radio 6 Music and Zane Lowe's influential Radio 1 show. The band will set out on a run of select U.S. tour dates that begins this Friday, May 28th, but first they are proud to offer their lead single "Night & Day" as a free download" [Domino Records]

Grab "Night & Day" above. All dates below.

Dirty Projectors' other upcoming shows include a headlining gig at Terminal 5 on September 11th which Owen Pallett is now opening. All dates below.

St. Vincent has a headlining show coming up at Summerstage and she'll sing with Ben Gibbard at the June 8th Simon & Garfunkel-themed Summerstage benefit. You can also catch her playing DJ at Brooklyn Bowl tonight (5/25).

Speaking of David Byrne, he's been busy as usual. He's suing Florida governor Charlie Crist. And his Here Lies Love project came out in April. (Eerily, that record, about Philippine first lady and political figure Imelda Marcos, corresponded with the political success of Imelda and the Marcos family in a May election.)

There's a new book on Byrne & Talking Heads called Song and Circumstance: The Work of David Byrne from Talking Heads to the Present, which sports a cover photo by BV photographer Chris La Putt (taken at Byrne's Radio City show in 2009). Congrats Chris!

David Byrne's own book, Bicycle Diaries, came out last year. Videos of David's lecture on bikes, scenes from his 2009 "Songs of David Byrne and Brian Eno" tour, and all Chief & DP dates are below...

--
Ride, Rise, Roar Directed by David Hillman Curtis, a look behind the scenes of the "Songs of David Byrne and Brian Eno Tour"