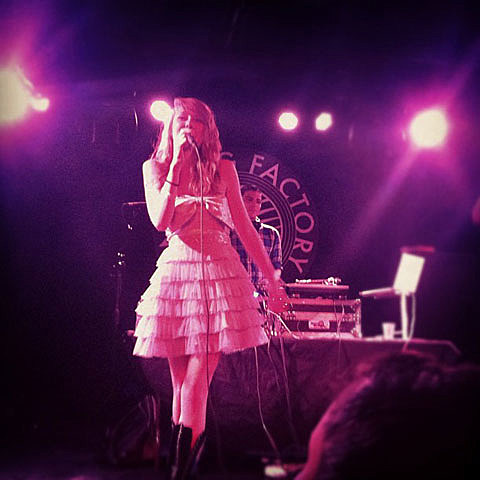 "...Pryde bounced through new cuts like "Orion's Belt" (though featured guest rapper Riff Raff was unfortunately not in attendance) and "smiledog.jpg," as well as older tracks like "Thanks Kathryn Obvious," which caused quite the reaction with its "I can go a lot harder than Gucci Gucci, Louis Louis, Fendi Fendi, Prada" Kreayshawn reference. Though the crowd first took it as a diss, Pryde became slightly embarrassed, pausing to laugh and make clear that the lyric was not a dig before professing her love for Kreayshawn, New York Times journalist Jon Caramanica and hip-hop writer Andrew Noz in individual shoutouts.

The Daytona Beach native closed her set with "Okay Cupid" and "Give Me Scabies," the latter of which samples Carly Rae Jepsen's inescapable smash "Call Me Maybe." As the crowd sang along, people seemed pleased, excited, and energized by Pryde's endearing confidence and charisma. "This is my first show where I didn't know anyone, so if I did bad, I'm sorry," she confessed as she left the stage..." [Rolling Stone]

That Rolling Stone review comes from the much hyped Kitty Pryde show that took place at Knitting Factory in Brooklyn as part of the Northside Fest on Friday night. Billboard, Village Voice, NY Mag, and Pitchfork were there too. Vice just premiered her new video, which unlike the live show, does have Riff Raff, who just signed to Mad Decent, in it. Watch that and a live video from the NYC show, below...