Someone on Instagram described Klaus Johann Grobe's Daniel Bachmann as a "krispy" drummer which kept running through my mind last night at the Swiss group's first-ever NYC show (which was presented by BrooklynVegan). Bachmann's style is tight and efficient, dropping fills when needed but mainly focusing on propelling the groove forward. And what a groove! KJG fly on pure shake appeal, breaking language and sound barriers like The Concorde.

Bachmann, along with all-business bassist Stephan Brunner, are Klaus Johann Grobe's twin engine live but it's keyboardist Sevi Landolt, who manned four or five vintage organs and analogue synths, who provides the color. Both Bachmann and Landolt take turn on lead vocals and are both positioned in front on the stage, angled toward each other, making for precision sonic gears. The Cake Shop set was front-loaded with songs from the brand new Spagat Der Lieb, which sounded great, but for me it was their extended mid-set take on early single "Traumhaft" where things really took off. The crowd seemed more familiar with the songs from 2014's Im Sinne der Zeit -- the zoomy "Between the Buttons," relentlessly funky "Kothek" and the charming "Schlaufen Der Zukunft" -- but new ones, especially "Ein Guter Tag" and "Rosen des Abschieds" were great too. Super fun show.

Personal Space and Gamblers opened the Cake Shop show. You can catch Klaus Johann Grobe again tonight (5/12) at Shea Stadium, which BV is also presenting. The show has a very solid bill that also features Brooklyn's krauty/noisy mood-masters Grooms and the Stereolab-y Operator. Tickets are still available and flyer for the show is below. Hope to see you there. 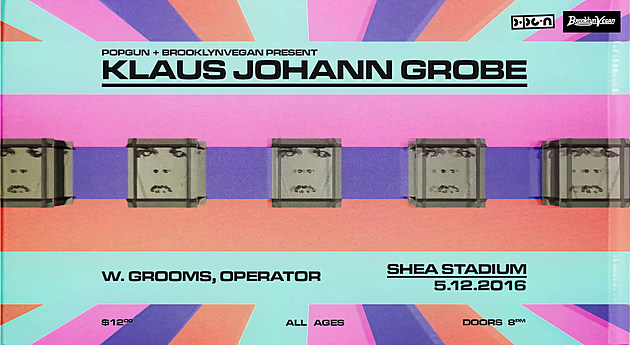