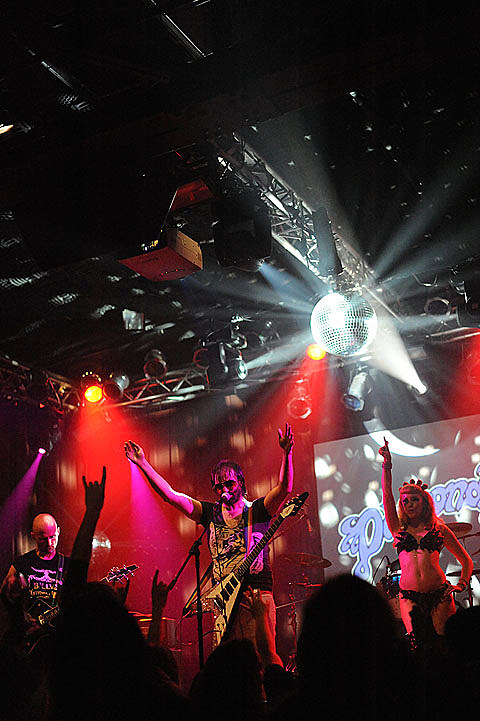 Comedian and opinionated audiophile John Frusciante (editor's note: NOT the Frusciante from the Chili Peppers) hosts a revolving panel of music-loving comedians, writers and musicians for a live monthly discussion about the state of music past and present, what you should and shouldn't be listening to, and why KISS sucks so much. It is a guarantee that your favorite band will at some point be brought up, dissected, and either praised to the rafters or dismissed with the wave of a hand that knows how to properly handle vinyl.

In the world of befuddling circumstances flying out of nowhere and landing in my lap, being asked to be a panelist alongside Moby (who played the Electric Zoo Festival over Labor Day Weekend), Dave Hill, and Jake Fogelnest (who, like BrooklynVegan, can be heard on SIRIUS XMU) at the UCB Theater in NYC on Saturday, September 11th at Midnight takes the frikkin cake. The event is essentially going to be a round-table discussion about the state of music past, present, and future (see a more detailed show description above). What will I, an ambassador for BV, be bringing to the table?

Ironically, I don't think there's even going to be a table there to bring the aforementioned attributes to; rather, we'll be in chairs, un-miced. I'll have nothing to hide behind and will have to do my best Richard Burton to be sure my voice projects. Annnnywhoozle. Having Moby and Dave Hill on the same panel does make quite a bit of sense. You see, Moby and Dave Hill are in a band called Diamondsnake, a band that also features Phil Costello (frontman of now defunct Bee Gees cover band Tragedy and guitar player for the probably defunct Satanicide) and Tomato (Sound of Urchin, Moistboyz)(look closely at the Moistboyz Live Jihad video, recorded at Bowery. A drunken Klaus appears occasionally in the front row with a red hat).

Diamondsnake has 2 NYC SHOWS coming up. The first is on October 2nd at Mercury Lounge, and the following NYC show is at Brooklyn Bowl on November 4th as part of Lebowski Fest.

The UCB show is going to be tons of fun and even though I have a propensity towards negativity, I'm going in with my mind, ears, and guts wide open. Hope you can make it! Cheap beer! RESERVE YOUR SEAT NOW!