"...Part of the reason is that the EP has a lot of guest musicians from various bands we like (The National, Shudder To Think, St.Vincent, Pattern Is Movement, Physics of Meaning, and Dirty Projectors to be specific). I only sing half the songs actually. The rest is done by singers from those bands." - Alex from The Forms 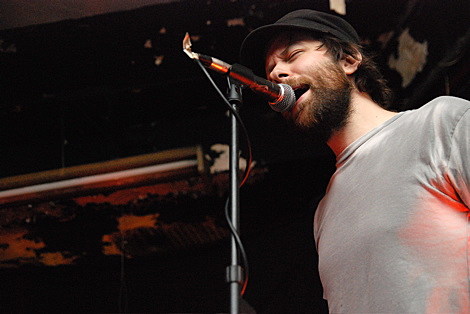 Of the millions of bands one could take a fancy to in their lifetime, it's kind of a weird phenomenon to consider a band consisting of your friends as one of your absolute favorites. Sure, we'll always support our friends' bands with kind words and by showing up at gigs, but to say "I like my buddy's band as much as I like [insert other favorite band here]" and actually mean it? Well, in the case of me and The Forms, truer words have never been spoken.

Anyone familiar with a Klaus post knows that I like to talk about myself. Let me keep that tradition alive. The Forms and I go way back. The guitar player and the bass player of a band I was in starting in 2001 both went to high school with Forms mainstays Matt and Alex (in high school they had a band called The Heathers). The guitar player for my band was doing double-duty as the Forms bass player (at the time they were a 3-piece outfit) and can be heard tearing up the-guitar-that-hath-but-4-strings on The Forms' critically acclaimed first album Icarus. At the time, Alex was living with the a fore mentioned bass and guitar players, but when Alex left that living situation I took over his room. At some point during that period, Matt (of the Forms) and I had a project called The False Gods wherein Matt wrote all the music and I did my best to keep up with it on the drums. We had maybe one gig and it was at the Charleston back when the Charleston was run by an old guy and his son and the basement was used to store things. That project didn't last long and the guitar player for my main band left the Forms to focus on our project. The Forms from that point on went through many line up changes going from a three piece to a four piece, to another four piece, and then down to what is now a two piece. Because of the time they take to record records, the various side projects, and the sparse gigging tendencies, someone somewhere along the line referred to them as glacier rock which I always found quite fitting.

What does the future bring? Well, they are getting ready to release a new guest-filled EP and they have a NYC gig happening very soon. It takes place Monday, August 16th at The Knitting Factory in Brooklyn. The show is being billed as The Onion / AV Club Present, and tickets are only 10 bucks. It's been a while since any Forms news has surfaced, so I recently asked Alex 5 questions to get us all up to speed:

What is your current line-up?

Alex: It's me and Matt Walsh. I play a midi controller keyboard that runs through a sampler plus an occasional accordion, and matt plays drums/percussion and a sequencer.

What's the status of the new ep/lp/cd/tape?

It's an EP with 6 songs called Derealization, and the scheduled release date is 1-11-11. The music is inspired by some other things we've done, ideas that just wouldn't go away, so some of it might sound a little familiar to people that know our music, but probably not too much. Part of the reason is that the EP has a lot of guest musicians from various bands we like (The National, Shudder To Think, St.Vincent, Pattern Is Movement, Physics of Meaning, and Dirty Projectors to be specific). I only sing half the songs actually. The rest is done by singers from those bands. The EP was recorded at Matt's home studio in Ridgewood Queens by Scott Solter (St. Vincent, Mountain Goats, John Vanderslice) .

Any other upcoming gigs?

We'll be playing CMJ and Pop Montreal in October and probably a show at the Rock Shop in September.

Has your style change since your last record?

As alluded to before, Matt built a studio in Ridgewood called Florida Keys NYC (he recently recorded The Hold Steady there), so things are moving so much faster for us now, which is good considering how unprolific we've been in the past. how we sound is evolving just as rapidly. the music we write these days is much more electronic and tribal and dancey, but the EP that we recently finished is a lot more orchestral.

Matt is playing in a two-member band called Time Travel with Travis Morrison, who sang for The Dismemberment Plan. Matt also plays in a band called First Nature with his Desert Fathers bandmate Keith Malone (note from Klaus: The Desert Fathers record The Art of Reason is one of the best records I've ever heard). They just finished a new album. Matt's band The Desert Fathers is on indefinite hiatus. As for me, I've done some collaborations with the band Mountain Drug.