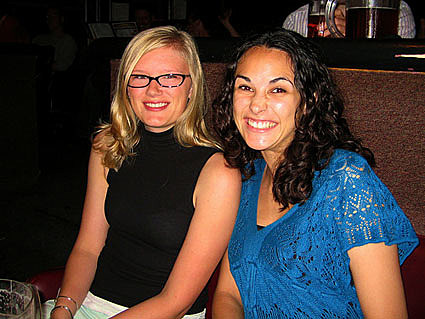 The caption to the above photo on Flickr is "keetah and me at the eugene mirman show at arlington draft house" (in case you were wondering), but more importantly....

NYC is being bombarded with fantastic comedy shows this week (tonight included). It's insane. I don't think I've ever had this much trouble figuring out what the hell to do with myself. Here are some highlights....

** Gelmania Presents: Brett Gelman's 1000 Cats: 8pm @ Rififi. Brett Gelman is performing his one man opus 1000 Cats tonight in it's entirety. This work of art is a masterpiece, and whenever he decides to pull it out of his bag of tricks people break whatever plans they have to see it. I don't want to sound too over-zealous, but I urge anyone with $5 kicking around to see this show. Not only is is one of the funniest, most absurd pieces of comedy you'll ever see, the fact that this is even happening is a mega-rare treat.

** 23/6 At The UCB Theatre: 8pm @ UCB: If seeing one of the most hilarious one-man shows at Rififi isn't your speed, then maybe head over to UCB for the 23/6 At The UCB Theatre show. This is a more traditional stand-up show featuring Mike Albo, Mike Birbiglia, Patrick Borelli, & Laurie Kilmartin. There's also going to be a video from the folks at 236.com. All this for a mere $5. I'm stunned it isn't sold out, so make a rezzie yo

** BIG TERRIFIC with Max and Gabe & Jenny: 8pm @ Sound Fix Records: Comedians Gabe Liedman & Jenny Slate hosted a bi-weekly show at Rififi on Mondays, then at Hugs on Thursdays. Max Silverstri had a show Sundays at Rifii and then a Thursday show at Sound Fix. Now, to make it easier for all of us, these three have banded together for a new weekly super-show at Sound Fix, the premiere installment of which happens tomorrow. The kick-off line-up includes Reggie Watts, Pete Holmes, the Perfect Storm and, of course, Max, Gabe, and Jenny. Expect MANY surprises too.

** Southpaw Guffaw: A Benefit to Help Rebuild the Gulf Coast: 8pm @ Southpaw: Ok, this show went from being amazing to being "easily the best way a person can spend $25 ever in the history of people spending $25". Michael Showalter, Eugene Mirman, Todd Barry, and Kristen Schaal are all confirmed to appear, and now it looks like Neko Case and Lucy Wainwright Roche are also going to be there. Holy crap. At $25, this is a bargain and a half. All proceeds go to South Toward Home, an awesome organization whose mission is to help rebuild the Gulf Coast.

** Waggy Tail Rescue Benefit Show: 9pm @ Sidewalk Bar: Another benefit, another insane line-up. Head over to Sidewalk Bar on Avenue A b/t 6th and 7th street, hand the person at the door ten bucks, and enjoy a comedy line-up featuring John Oliver, Joe Mande, Pete Holmes, Kumail Nanjiani, Laura Krafft, Christian Finnegan and special guests. The show is hosted by Brett Gelman and Jon Daily (Cracked Out). An awesome, inexpensive show benefitting little doggies in this fair city. Be there.

** MIKE BIRBIGLIA: 60 Minutes of New Comedy: 8pm @ UCB: Do you know how much you'd have to pay to see Birbigs do 60-minutes of comedy at a venue like Town Hall? Lots. UCB gives us all yet another bargain by giving us 60-minutes of Mike for a measly 8 bucks. This is a perfect opportunity for die hard Birbigs fans and the curious alike to see a really amazing show. (see also: Union Hall on Sunday)

** Kurt and Kristen in "Double Down Hearts": 11pm @ The Pit: "Kristen Schaal and Kurt Braunohler present a sordid tale of gambling, death, and hair-lips, with a touch of phone sex. Known for their electric, on-stage chemistry and questionable relationship off-stage, Kurt and Kristen present a special preview of their 50 minute 2008 Edinburgh show."

** MIKE BIRBIGLIA: 60 Minutes of New Comedy: 8pm @ UNION HALL: Do you know how much you'd have to pay to see Birbigs do 60-minutes of comedy at a venue like Town Hall? Lots. UCB gives us all yet another bargain by giving us 60-minutes of Mike for a measly 7 bucks. This is a perfect opportunity for die hard Birbigs fans and the curious alike to see a really amazing show. (see also: UCB two days earlier)

-until the next time Klaus feels like doing this