Klaus is back with week two of his 'comedy canon'.
Don't know what this is? See week one. 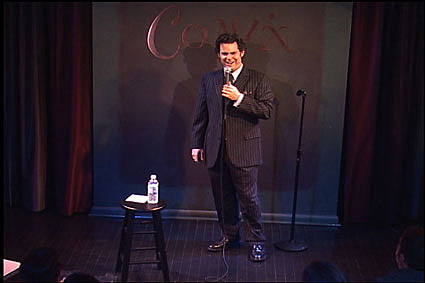 On Friday January 5th, I attended a spectacular comedy show at Comix featuring Paul F. Tompkins, Kristin Schaal, and John Mulaney. Yes, comedy clubs are often frowned upon within the alt. comedy community, but I have to say that Comix is really a great club - especially when compared to a place like Caroline’s and other NYC ‘comedy clubs’ (…don’t get me wrong; Caroline’s books great acts, but it’s way out of my price range). 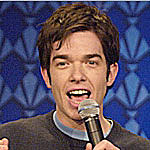 Sure, Comix has that signature clean, classy atmosphere, but the cover there is quite reasonable and you aren’t nailed with any two-drink minimum nonsense. And you really couldn’t beat the January 5th line-up. John Mulaney served as the main opener-slash-show MC and completely aced his set before handing the mic over to Kristen Schaal. I haven’t seen Mulaney in a while so a lot of his material felt very fresh to me, whereas Schaal’s material felt too familiar having just seen her at the Invite Them Up show at Bowery last month. The highlight of Schaal’s set for me was the look of utter confusion on the girls' faces sitting just in front of the stage; they kept looking at each other like Kristen was speaking some completely whacked out alien language.

Tompkins really stole the show though. His set varied from flawless riffing and improv, to obviously well rehearsed yet extremely hilarious bits. I caught him at the Invite Them Up show at Bowery as well, but was inebriated enough at the time that his set seemed brand spanking new to me now. And I sat two tables over from Tom Scharpling and his wife; not surprising considering Paul F. Tompkins was a guest on his show on January 2nd. 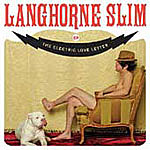 The following evening, January 6th, I headed further downtown to catch the always incredible Moonwork: An Evening of Original Works show. These monthly shows shatter the principles of New York City economics; for $20 you get to see 4-5 comedians, musicians, and monologists, and you get all the Harp, Amstel, and Heineken you can drink. The venue is a large, airy gymnasium-turned-nightclub that gets full, but never feels uncomfortably crowded. This installment of Moonwork consisted of Andre du Bouchet, Jane Borden, Eric Slovin, Todd Barry, Langhorne Slim, and Tom Shillue. Langhorne Slim and Tom Shillue were the true stand-out acts of the evening. I found Langhorne's seemingly improvised set to be some of the most excellently executed solo folk I have seen in a while. And being a Boston native myself, I found Tom's tales of living in Dorchester with his mother and retarded uncle both side splittingly hilarious and heartwarming. It was such a wonderful blend of monologue and stand-up. As a Bostonian living in New York, the fact that he worked Liz Walker into his stand-up routine made me somewhat homesick. 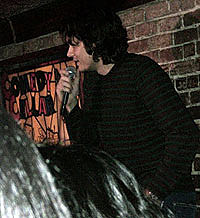 Let's jump into this week’s Comedy Canon by revisiting an article posted on The Apiary. Mom-rocker John Mayer is back on the stand-up circuit. Apparently, he crashed a showcase at the Comedy Cellar and did a 10-minute set that was surprisingly pretty funny. Chris Serico was there and compiled a fantastic "Ten Things" list. I can personally identify with #4 - Body Shaping was in very close proximity to The Price is Right in the morning TV line-up.

I’ve always found Sacha Baron Cohen to be a profoundly funny comedian & actor. He is best known for his characters Ali G, Bruno and, of course, Borat. He is also known for snubbing those who want to interview him. Incredibly NPR managed to get him on their 'Fresh Air' program on January 4th.

Speaking of DVD releases, Zach Galifianakis posted a bulletin on myspace saying that his DVD Live at the Purple Onion will be available on Netflix beginning January 16, 2007. It won’t be available for purchase by the general public until March 6th. Watch a Zach video at YouTube.

All female variety powerhouse Variety Shac take their once-a-month-at-Galapagos showcase to the UCB Theater on January 17th at 9:30pm. Hosted by Shonali Bhowmik, Heather Lawless, Andrea Rosen, and Chelsea Peretti, the show is a mere $5.00.

In the span of one week, Comix has a huge pile of great shows happening. Janeane Garofalo is doing 5 shows with Marc Maron between January 11th and January 13th. Andy Kaufman award winner and all around music and comedy virtuoso Reggie Watts is doing a single show on January 14th. And then Doug Benson, Arj Barker, and Tony Camin bring their doobie-centric monologues to Comix for 5 performances of The Marijuana-Logues. These 5 shows happen between the 17th and the 20th . If you haven’t been to Comix yet, these are 11 really solid reasons to check the place out.

BV CMJ show veteran Dave Hill brings the explosion back to NYC for the first time since October, 2006. Reserve tickets now for The Dave Hill Explosion at the UCB Theater on January 11th where he will be joined by Coast of Utopia cast member Martha Plimpton and musician Simon Scott.

As I mentioned earlier, the only real draw back to Caroline's is the cost. However, sometimes a show comes along that is so incredible that one must really consider biting the bullet and making a reservation. Sarah Silverman's 4 performances between 1/30 and 1/31 would be such an occasion. These are 4 shows that I can safely say will sell out regardless of cover charge, so I recommend calling 212-757-4100 ASAPs yo. Oh, and someone sent me a very base and immature Sarah Silverman Survey. Enjoy, sicko. 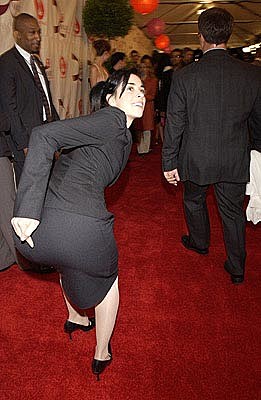 An invaluable resource on the internet for interviews with comedians is One Trick Pony. Ben Kharakh has interviewed pretty much everybody who’s somebody in world of comedy. Some of the comedians are fairly mainstream, while others are staples of the alternative comedy circuit. If you have the time, explore this vast resource of interviews. If you don’t have the time, make it.

Mr. Show bloopers not available on any DVD....