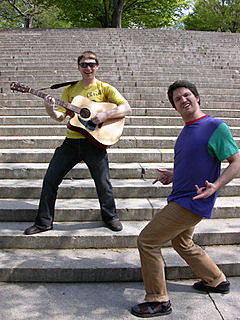 The big news around town (or, in my brain at least) is the fact that Christian folk duo God's Pottery is ready to unleash a new 1-hour show onto us Godless, sinful New Yorkers before heading off to Canada and Scotland to spread fellowship. You see, last summer they put on several benefit shows known as The Concert For LaVert. The success of those shows made them realize they were doing mankind a huge disservice by helping only one soul at a time. To remedy this, they bring us God's Pottery Saves The World. In this new show, the boys take on more global issues like adoption, drug addiction, and Africa in an effort to save all mankind through the power of song, true belief, and a PowerPoint™ presentation.

New York is entitled to three performances only before they take on the world. They're at the UCB Theatre, and you better make reservations now, or else be damned to swelter in anquish in the stand-by line 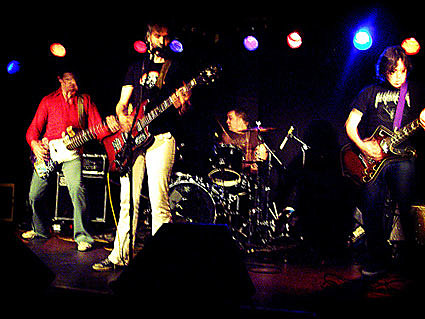 For you LA readers, Tim and Eric are hosting AWESOMECON on July 28, 2007. The event promises to be a spectacle to behold. Highlights include

Oh, whoever wins the most points from the AWESOMECON picnic events as well as the trivia contest gets to go on a free wave runner ride with Tim and Eric! (Dressing up like Casey and his Brother wins you many bonus points.). More details HERE

These have been making to rounds on the internet lately, but in case you missed it, Aziz Ansari decided to get down with VBS and Dos & Don'ts Friends on VBS and laugh at some people with them. Watch em:

Aziz Dos and Don'ts
#1: He attracts douchebags
#2: Aziz on the downside of lace cock socks
#3: He has a highly tuned gaydar

Just a reminder: Brooklyn's Southpaw will play host to a South Towards Home comedy benefit on 7/12/07. Guests include David Cross, Todd Barry, and Jon Benjamin. Tickets are $25.00. That line-up is worth the ticket price alone.

Patton Oswalt had a short essay in Vice recently. He'll be at Sound Fix the same night as the above Katrina event.

You have GOT to check out the stuff Bob Odenkirk is doing for Superdeluxe. Sheer genius.