We're playing some catch up, so here is the first half of this week's Comedy Canon.... 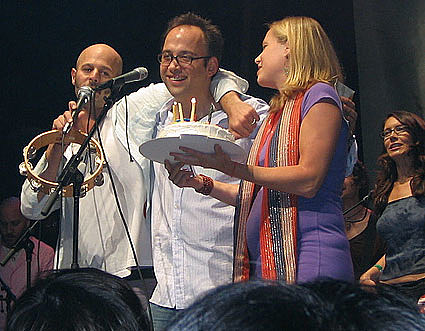 I unfortunately couldn't make it to last night's "Ten" event at the Blender (Gramercy) Theatre, but as you can see from the picture above - the film's co-creator David Wain was also celebrating his birthday. How did it go?

This Fall, Drag City will release the first in a series of DVD's called Fred Armisen Presents. For those of you not in the know, Fred is quite the seasoned drum veteran; he appears on the new Les Savy Fav record, he was in early 90's punk band Trenchmouth, and one of his most beloved characters on SNL was Fericito, a drumming latino variety show host. So it's only fitting that the first Fred Armisen Presents DVD will focus on drum wunderkind Jenns Hannemann whose Complicated Drumming Technique made Fred realize Jenns is a man who could change the world of drum instruction . Billed as an incredible educational opportunity for the musician in us all the disc is set to hit music shops around the globe in October.

But wait; who the hell is Jenns Hannemann? I don't know, but according to Pitchfork, Jenns recently did a show with Will Oldham. He also put on a clinic in Canada last month. This guy's good. Real good.

And speaking of Will Oldham, have you seen the new Kanye West video he's in with Zach Galifianakis? Probably yes, but if not, hurry up!

Neil Hamburger is on tour, and going on tour. He'll be at the Knitting Factory in NYCon September 8, 2007 with Pleaseeasaur. If anyone reading this will be in Chicago on August 4, 2007 - and looks like Neil, why not enter the NEIL HAMBURGER LOOK-A-LIKE CONTEST. The winner gets two tickets to his Lakeshore Theater gig. My condolences to the winner.

All of Neil's tour dates can be found at the end of this post, and much more comedy, below...

Todd Barry is another comedian with a whole assload of upcoming shows across the country. He's recording another LIVE CD over the course of three shows on August 2nd and 3rd at the Comedy Studio in Cambridge (two shows are already sold out). Then he's got five shows lined up at the Punchline in San Francisco. Then he hits the road with Louis CK for another 11 shows. On November 7th he plays Carnegie Hall with Sarah Silverman - it's part of the 2007 New York Comedy Festival. Check out Todd Barry's tour dates page for more info on his shows, and make sure to look at the comedy festival's site for more info on what they have going on as well.

Comedian Demetri Martin took the stage at a recent Travis show at Irving Plaza to perform a live white t-shirt ode to "Selfish Jean". Thighs Wide Shut has a review of the show as well as a fantastic side-by-side video embed showing the Irving Plaza version and the regular video version.

There are some nights when the comedy stars align and I am afforded the opportunity to see nearly all of my favorite comedians in the course of a single evening. Thursday 7/12/07 was just such a night, though it actually began in the early evening and ended in the wee hours of the following morning.

I kicked things off with the Patton Oswalt performance and signing CD release party at Sound Fix Records in Williamsburg. I got there at 6:30pm to indulge in their $2 PBRs and by the time the 8:oopm performance started, the live room was completely full and the crowd literally spilled deep into the record store. Having just finished a Conan O' Brien taping, Patton, still with his TV make-up on, ripped into an 25-minute set full of new material and beaming with relentless energy. The room was totally into Patton and remained completely silent and focused throughout his set. Following his performance, Patton set up shop in the record store for a signing of his new album Wherewolves and Lollipops - released that day on Sub Pop (which Sound Fix ended up selling out of). 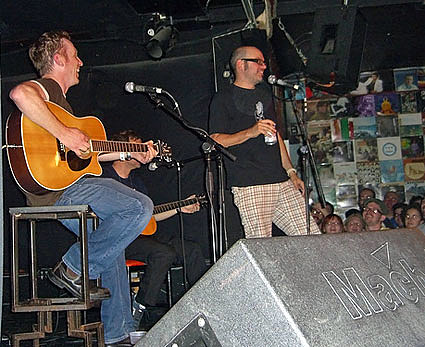 I ended up hitching a ride with Patton and some friends to SouthPaw for the Tinkle hosted South Toward Home benefit show. The show started an hour late so we arrived just as things were getting started. Hot, steamy, and completely packed don't even begin to adequately describe the situation at SouthPaw, but these less than ideal conditions did nothing to spoil the mood of the crowd or hinder the quality of the comedy. Hosted by Tinkle (David Cross, Todd Barry, and Jon Benjamin), the show featured Heather Lawless, John Roberts, Eugene Mirman, Kurt Braunohler and Kristen Schaal, A.D Miles,Patton Oswalt, and a short set by Buffalo Tom. Even though not a single comedian let me down, I have to say Patton, Eugene, and A.D. were by far the highlights of the evening if only because they hit me with a bunch of new material that was super strong and unbelievably funny. If you want a better play-by-play of the show, check out Bumpershine.