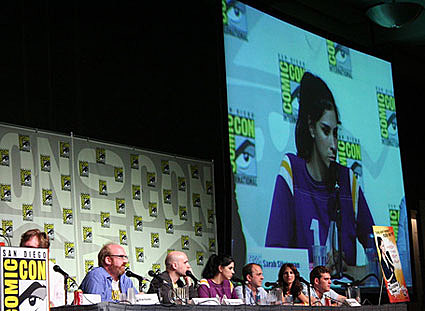 I was recently browsing the 92nd St. Y calendar and noticed that they have some unbelievable shows happening in the coming months. They're all very unique, once-in-a-lifetime type shows. Check it:

Check out more upcoming shows at the end of this post.

Oh, and Weird Al Yankovic, the nicest man in showbidness, is at the Beacon Theater on September 20th. THAT is going to be awesome. More tour dates at his site, and you can try the presale for tix too.

I rarely mention Mike Birbiglia on here, which is a shame because he is brilliant. In support of his new album, My Secret Public Journal Live, Mike Birbiglia is embarking on a massive tour. Lotsa colleges, lotsa theaters, no NYC. Complete list of dates here. Look out for the record on September 25th.

Sub Pop released a Flight of the Conchords EP entitled The Distant Future. It contains 6 tunes, 3 of which are live, and can be purchased for a mere $4.50. Their show continues to rock my world, and I'm praying for a season 2, but a recent interview with Jemaine casts some uncertainty about the show's future.

Speaking of buying stuff, Chunklet has an incredible Patton Oswalt 4 CD package deal that is a must buy. The set includes the double CD 222 along with the EPs Patton Vs. Alcohol Vs. Zach Vs. Patton and Pennsylvania Macaroni Company. And if you don't have it yet, buy Werewolves and Lollipops.

Aziz Ansari has alerted the universe that the fellows are working on Human Giant Season Two (which will broadcast, hopefully, in January of '08). Sadly this means Aziz won't be hosting Crash Test for a while. However, rat-bastard John Mulaney will be picking up the slack in his absence which is awesome.

Will you be in Sweden from September 19th - 28th? Do you like Jens Lekman? Do you like Todd Barry? Then you're going to flip when I say that Todd Barry is opening for Jens on seven of his dates in Sweden in September. A complete list of Jen Lekman's shows are HERE. Check out Todd's calendar for a complete list of dates including his tours with Jens, Louis CK, and his upcoming Carnegie Hall gig with Sarah Silverman. You can also see him as The Third Conchord in the September 2nd episode of Flight of the Conchords.

Tim and Eric are looking for interns. If I was independently wealthy I'd be all over this...

Hey Chippies!
We're looking for a few good interns to help us on the new season of Awesome Show. You must be at least 18 years old with a reliable car, live in Los Angeles, and be able to work at least three days a week. Ideal andidates will be self-motivated and willing to work long hours. Production experience a plus but not required. Send your resumes to jkmercer@brulesrules.com

In other Tim & Eric news, you can see a video from their recent Awesomecon here, and see pics here. They also put on a huge show in LA on 8/15 at the Troubador called Muscles for Bones. Did you go? Guests included Bob Odenkirk from Mr. Show, and I'm dying to hear how it was.