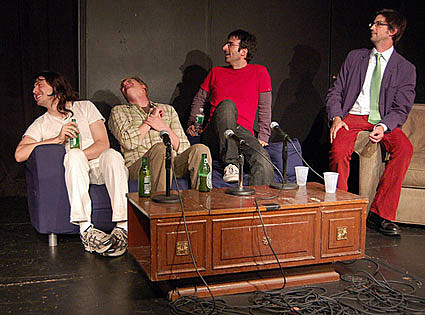 The UCB Theater played host to a freaking stupendous edition of Bro'In Out with Leo and Tony. The show, which featured guests Andrew WK, Jon Oliver, Kurt Braunohler and music by Sam Bisbee, may be the comedy highlight of my summer. The show kicked-off with a sedate and chill Andrew WK discussing his recent lectures and motivational speeches which I found quite interesting. I find his theme of blocking out the bad, letting in the good, and making sure you feel happy and fulfilled all the time a bit unrealistic though - for me at least. WK was followed by Hot Tub Variety co-host Kurt Braunohler who delivered a monologue about fathering thousands of children all over the country. I pretty much laughed throughout the entire monologue and pray he performs it again soon. Up next was Daily Show correspondent Jon Oliver. I should point out that at this point in the show the guests and hosts had just about finished an entire bottle of absinthe, and that the effects were totally dictating the direction of the show. When Jon Oliver hit the stage it was pretty much a free-for-all with guests and hosts talking over each other and just having a blast. One stand-out line occured during a back-and-forth between bartender Jawnee and Jon Oliver when Oliver exclaimed "Giving you alcohol is like giving a child a tambourine." Finally, Sam Bisbee came out to close out the evening with a few songs, one of which was the most touching ode to his little daughter. He was fantastic and brought the energy back down to a normal, non-manic level. I left the show sore. These pics truly capture the essence of the experience.

And speaking of shows, we're giving away a pair of tickets to the next installment of ROFL at Joe's Pub on August 31, 2007. To enter, send us an e-mail at BVCONTESTS@HOTMAIL.COM (subject: ROFL), and tell us the last thing that made you ROFL. Include your first and last name. One winner will be picked at random and contacted. ROFL! is high art, low humor, YouTube video, Myspace weirdness, flash animation, web memes, conceptual puzzles, original film and non-sequiturs galore.

A few weeks ago Stephen Colbert broke his wrist. Bid on the actual cast.

NYC comedy staple Variety Shac (featuring Heather Lawless, Chelsea Peretti, Andrea Rosen, and Shonali Bhowmik) is having a monster DVD release party on September 21st at the Knitting Factory. This evening of music, comedy, and shorts will have special guests including Zach Galifianakis, Fred Armisen, and Cory Arcangel. The show is on a Friday and tickets are only $8! Check out the sweet flyer.

Speaking of Fred Armisen.... Fred's been working on a new short video series called ThunderAnt with ex-Sleater-Kinney guitarist/vocalist Carrie Brownstein. A while back Fred and Carrie did a short called Boink! Look for the premiere of the newest video sometime soon on Stereogum. 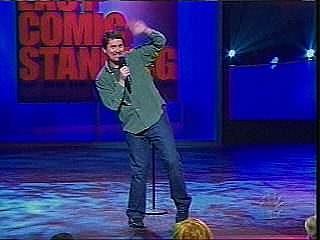 Doug Benson, one of my personal favorite comedians, was finally elimiated from shit-show Last Comic Standing. More on that and other topics at this great interview.

Comedians of Comedy dates are finally starting to appear! So far they announced two October dates happening in Portland and Seattle (flyer here). This is good news. This means the tour is taking shape and that hopefully a New York date announcement is just around the corner.

Dave Hill is a nudist?

Dead Frog gives us the low down on the upcoming New York Comedy Festival.

8/28/07 - 8:00pm - The Cutting Room - Leukemia Benefit: The $10 you pay to get into this will not only help fight leukemia, but it will allow you to see Eugene Mirman, John Mulaney, Leo Allen, Andy Blitz, Josh Comers, Tiger’s & Monkey’s, Demetri Martin, Chelsea Peretti, and Ophira Eisenberg!

9/3/07 - 8:00pm - UCB Theater - Jeff Garlin's COMBO PLATTER: Curb Your Enthusiasm's Jeff Garlin and friends are in town and will blow your mind.

9/7/07 - Midnight - UCB Theater - TRAPPED IN THE CLOSET - The New Chapters: A MUST SEE. From UCB, Join Aziz Ansari, Paul Scheer and a special guest panel as they view and discuss chapters 13-22 of R. Kelly's un-ironic hip-hopera, TRAPPED IN THE CLOSET, also known as "the most unintenionally hilarious music video of all time."