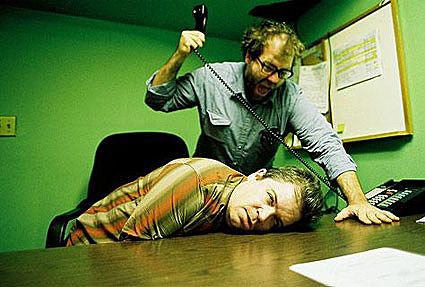 With the holidays fast approaching, nothing makes me happier than spreading holiday cheer by giving away free tickets to two awesome upcoming shows. First up are two pairs of tickets to A Very Special Night With Fred Armisen on November 29th at The Knitting Factory. The show will also feature Chelsea Peretti and Jon Glaser - one of the most brilliant comedians alive.

I also have two pairs of tickets to attend a special Yacht Rock event at the Knitting Factory on December 27. To me, Yacht Rock are the funniest videos ever to grace the internet, and if you haven't seen them, acquaint yourself immediately. The show, hosted by Yacht Rock creator JD Ryznar (Michael McDonald), includes a screening of all 10 episodes, as well as musical guests The School of Rock playing Yacht Rock Classics. YR cast members will also be in the house.

Details on how to win either contest, as well as more phenomenal upcoming shows, at the end of this post....

But first...I always heard a lot of great things about LA based comedian Brody Stevens but never actually took the time to familiarize myself with him. However, his recent contributions to the Comedy Death Ray profile on Superdeluxe have made me a huge fan. For those who don't know, Comedy Death Ray is a weekly "alternative" comedy show in L.A. founded by former Mr. Show writers/actors, Scott Aukerman and B.J. Porter - they created one of the best comedy CDs ever by the way. Anyhow, Brody's show is called The Brody Stevens Interview Challenge and the premiere episode features Zach Galifianakis. Watch Part 1 below, and head on over to Superdeluxe for Part 2. Keep checking back as more episodes are sure to surface.....

The big news around town has to be that British comedian Daniel Kitson has confirmed three shows at Union Hall on December 2, 3, and 4. Hailed as a favorite of comedians including David Cross and Eugene Mirman, Daniel Kitson doesn't get to the states enough. Like a jerk, the last time he was around I missed every single one of his appearances. I shan't make the same mistake twice. These shows are going to sell out for sure, so get tickets ASAP!.

Bobby Tisdale, co-Host of Invite Them Up, has a new bi-weekly show at Cake Shop called Llama Toe with Bobby and Friends. Co-Hosted by Reggie Watts, this show originally took place at Caroline's and man am I glad it's been moved to Cake Shop. 5 bucks, no minimum, no touristas.

In other LA comedy news, duo Tim and Eric have been seriously busy lately. I know T&E aren't everyone's cup of tea, but their stuff is so bizarre and absurd that I find them totally addictive.

Check out the NOVEMBER 6th episode of The Best Show on WFMU With Tom Scharpling in their archives as it features Fred Armisen and drum virtuoso Jens Hanneman in a really long, funny, and interesting conversation.

The whole writer's strike can be a bit confusing and difficult to navigate. Aspecialthing has a thread devoted to the strike. Contributors include writers from all over the entertainment biz as well as your average Joes and Janes. It's a great resource and a great way to see what people (including writers from Conan O Brien) have to say about the situation.

Comedian Tom Sharpe has contracted debilitating strain of Lyme disease. Tom has suffered from headaches and dizziness for months, and has had to move home to Iowa to be taken care of by his family. The Lyme's hasn't let up, and Tom has been subjected to endless tests, doctor visits and stomach problems, losing 40 pounds in the process. One of Iowa's drawbacks is its lack of Lyme medical experts, so Tom has had to travel to New York and Chicago for further testing and treatments -- not covered by insurance. He has undergone TWO spinal taps, and the medical torments continue. On November 12, a benefit show featuring Sarah Silverman, Bob Odenkirk, Maria Bamford, Marc Maron, Paul F. Tompkins, Hard n Phirm, Jimmy Pardo, Tig Notaro, Martha Kelly and others was held in order to raise funds on his behalf. If anyone reading this wants to help, and every little bit helps, please consider making a donation via PayPal. Use the address joanadark at sbcglobal.net. Please put "Tom donation" and your name in the subject line so they know who it's from. 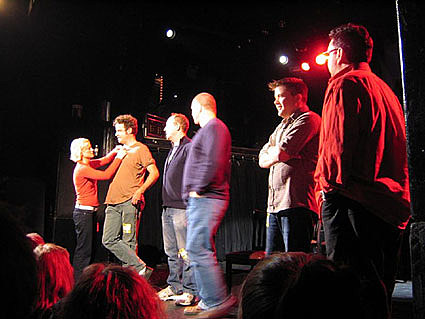 Then of course there's Saturday Night Live @ UCB too.

And tickets are on sale for the Aimee Mann holiday show at Manhattan's Grand Ballroom on December 14th. Special comedic guests include Paul F Tompkins and Morgan Murphy.

And in case you missed it, Michael Showalter stopped by this blog.

HERE'S HOW TO WIN: (the contests at the very top of this post) Send an e-mail to BVCONTESTS@HOTMAIL.COM (subject: YACHT! or ARMISEN). Include your first and last name for guestlist. Winners will be selected at random and notified.

Filed Under: Aimee Mann, Comedians of Comedy, Daniel Kitson, Fred Armisen, Jon Glaser, Yacht Rock
Categories: Comedy News
Comments
Leave A Comment
Everybody showed up to be in George Harrison’s “My Sweet Lord” video
Low & Fred Armisen helped Yo La Tengo celebrate their 37th birthday at Hanukkah Night 5 (pics, setlist, video)
Fiery Furnaces played Brooklyn Steel with Fred Armisen (pics, setlist, video)
Win tickets to Fiery Furnaces’ Brooklyn show & a 7″ of “Down at the So and So on Somewhere”
24 New Songs Out Today
Our favorite songs of the week (playlist)