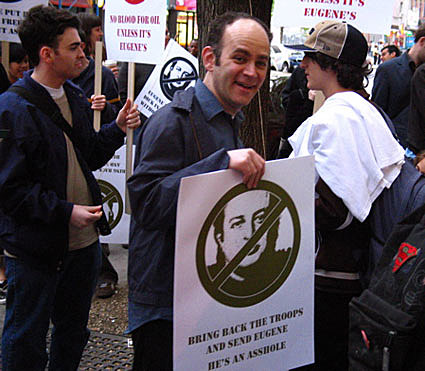 Louis CK is taping a new stand-up special called Chewed Up! It will take place in Boston on March 1, 2008. Tickets go on sale through ticketmaster on 1/25/08 and are $30. HOWEVER, a limited number of $10 tickets will be available through Louis' website so keep checking it for details!

A while back I told y'alls that Eugene Mirman's Comedy Central Presents episode will be airing on Friday February 1st at 10:00pm. Like you, I was happy to hear the episode would finally be airing. Also, like you, I wasn't really looking forward to sitting in my apartment on a Friday night watching TV. Luckily Eugene, a man of intuition and foresight, has come to our rescue and will be having a FREE little screening party at Union Hall.

The details for that, and MUCH MORE, are below.... Oh, speaking of Eugene, don't forget that on Tuesday, Jan 29, 2008, the Knitting Factory is hosting a comedy fundraiser event thing called Get the Laughs and Votes Out for Obama. The line-up includes Aziz Ansari, Eugene Mirman, Heather Lawless, Andrea Rosen, Slovin and Allen, Todd Barry, David Rees, Whitest Kids U Know, Laura Krafft, Greg Johnson and more! There will be music from Shonali Bhowmik and Marcellus Hall too. HUGE! Obama fundraiser or not, this show is a monster. More shows below....

In other interview news, Ben Kharakh has been busting his rumpus interviewing awesome people. I highly enjoyed his two part interview with Funny or Die co-founder Adam McKay. His Mike Patton interview is also boss.

A trailer has been released for comedian Doug Benson's doobiecentric documentary Super High Me. The documentary follows Doug as he completely abstains from marijuana for 30 days and then consumes mass quantities of it of 30 days. Hopefully this sucker will be gracing the screens of local cinemas sometime in the near future.

2/8 -2/9 - 8:00pm, 10:45pm - Comix: Kristen Schaal and Arj Barker. This show will be a great opportunity for stupid people to realize that Kristen and Arj are way more than just cast members of Flight of the Conchords

2/6/08 - 8:00pm - Comix: Eugene Mirman. Support your local comedians and see them when they headline the big clubs, will ya?