DOWNLOAD: Neil Hamburger - At Least I Was Paid (MP3) 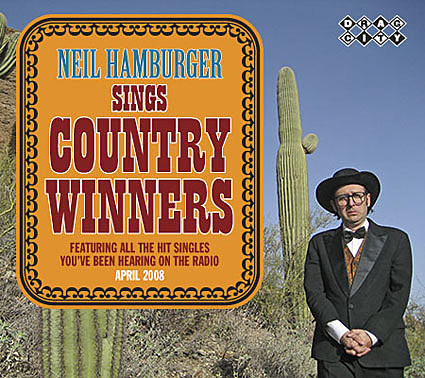 Well, what else do we need to say about this? "America's Funnyman" ("The World's Funnyman," actually) has decided to sing America's music at last! The country crooning of Neil Hamburger (though some would call it moaning) fits the white blues that is country music to a T! Neil's life story is perfect fodder for the "tear in the beer" genre as well - and Neil's original tunes, such as "At Least I Got Paid," "Three Piece Chicken Dinner" and "The Recycle Bin" bring his personality to the fore. His crack "Nashville West" band includes such luminaries as Dave Gleason, Atom Ellis, Prairie Prince, Rachel Haden and Joe Goldmark, all of whom play and sing their country-fried hearts out to create a sound that is decidedly old-school honky-tonk. All this plus cover versions of John Entwistle, Mark Eitzel and Billy Edd Wheeler add up to a powerful singing debut from America's newest hat act, Neil Hamburger!

Neil Hamburger Sings Country Winners is out this Tuesday April 22nd on Drag City! Some tour dates and a video at the end of this post.

I recently mentioned that Bob Odenkirk and David Cross would soon begin work on a pilot for HBO. Lo and behold, production of David's Situation begins May 9th, 2008 in sunny Los Angeles, with a live audience and everything. This show can't be completed and devoured by my eyes and ears soon enough. If anyone goes to the taping, tell me everything.

Speaking of people soon-to-be producing things that I expect to be phenomenal, one of New York's finest comedians Tom McCaffrey recorded a live CD on April 20th at Pianos. The show featured Sam Brown and Timmy Williams from the Whitest Kids U Know as well as Roger Hailes and Greg Johnson. Should be a great record.

And while I'm on the subject of comedians making live albums, I should mention that Marc Maron recorded his THIRD live CD in Seattle on April 4th and 5th. The CD will be put out by Stand-Up! Records. Marc has a very angry, agitated, aggressive and stream of conscious style of stand up that I really dig. His other two albums Tickets Still Available and Not Sold Out are totally still available and not sold out and are highly recommended by yours truly.

Don't forget to catch Marc Maron along with Eugene Mirman and Andy Kindler on the Stand Uppity Tour (full dates below)!

Hey, since we're talking about Eugene Mirman, this might be a good time to mention the inaugural Alternative Comedy Festival happening at the beautiful Somerville Theater in Somerville Mass on May 9th and 10th. The event boasts an INSANE line-up of comedians, both from NYC and elsewhere and is totally worth checking out if you're in the area. May 9th features Eugene Mirman, Todd Barry, Emo Philips, and doktor cocacolamcdonalds. May 10th features Patton Oswalt, Morgan Murphy, Jim Jeffries and Boston's own Walsh Brothers. Discount tickets are available this very second if you use the password OSWALT. These are the kinds of line-ups that bring tears to my eyes.

In March of 2005, the world lost one of it's greatest comedians when Mitch Hedberg passed away. He was so loved and respected by his fans, friends and his peers in the comedy community that his passing at age 37 left everyone at a total loss. So when I heard he'd be releasing a third album posthumously I was a bit taken aback. Turns out his wife, comedian Lynn Shawcroft, is overseeing the whole production process. In a recent PunchlineMagazine.com article, Shawcroft states:

The audio for the album was taken from a weekend of shows three months before Mitch died. He wasn't recording these sets for release so there's mistakes in there. But I like that. Mitch was at the point where he was doing new and old material, so we're going through it now trying to pick out the new stuff. I want it to be a new material CD-- not a best of.

Mitch is still hailed as one of the greatest stand-up talents ever (he's the #1 fan favorite on Dead Frog), so this record will be a wonderful way to get reacquainted with a comic we thought was gone forever.

Tim and Eric Awesome Show Great Job! is easily one of the funniest, most insane shows ever to hit the boob tube and it's one of my all-time favorites. Amongst the onslaught of animation and live action there are these incredible songs that are not only hilarious, but are remarkably well crafted. It never occurred to me how many songs they've actually come up with until I saw the awe-inspiring track listing for their upcoming CD Awesome Record, Great Songs!. The disc is set to drop on May 9th, but you can also get it at one of their upcoming live shows, including two at the Highline Ballroom on April 22nd which are hella sold out

If you can't get to any of the T&E shows because they were sold out by the time you decided to buy a ticket, why not sit at home and have fun making a Casey, Casey's Brother, or Casey's Brother Hamburger foldable toy!?

There's one online video serial that has consistently been killing me since episode 1; Horrible People. The brainchild of AD Miles (Wet Hot American Summer, Dog Bites Man), the show features the likes of Kristen Schaal, Joe Lo Truglio and scads of other actors and actresses who fit perfectly into their roles. The show is essentially the greatest caricature of a typical soap opera ever made and they just unleashed their season finale. If this show doesn't grab you by the end of opening credits, you're a corpse. It's stuff like this that makes me wish I was funny and/or could act.

ALERT! The Found Footage Festival to Debut All-New 2008 Show in New York! Seriously, this is going to be the greatest. For those who don't know, The FFF is curated by Joe Pickett and Nick Prueher and what they do is essentially showcase some of the best and funniest video footage they've discovered on videotapes found in thrift stores, dumpsters, garage sales, and warehouses all over the country. The all new show for 2008 will be held at the Anthology Film Archives on April 25th and 26th (two shows each night, 7pm & 9pm. Get Your Tickets Here. Seriously. You aren't going to believe what your fellow Americans are capable of producing on video.

Profuse congratulations to Kristen Schaal (and British ventriloquist Nina Conti) for winning the Barry award at the Melbourne International Comedy Festival. They beat the shit out of 300 other acts and took the top prize. Nice!

53 pages, 1005 messages (not all his, obviously), and 135857 (and counting) page reads later, one of my favorite comedians Paul F. Tompkins decides to cease chatting with a loving and devoted population of his fans.

Like many other people, I was completely shit out of luck when it came to getting tickets to one of the upcoming Flight of the Conchords shows. However, the super sweet person who runs the unofficial Conchords website has set up a forum where people can trade and sell tickets for face value. Here goes nothin'

4/30 - 9:30pm - UCB Theater - Kenny Mayne Has Written A Book: Kenny Mayne (ESPN, Dancing with the Stars) is coming to the UCB Theatre for one night only to read from his new book, An Incomplete & Inaccurate History of Sport. The show also features Chris Gethard, John Flynn, Jon Gabrus, & John Mulaney. So awesome

4/30 - 8:00pm - Comix - Comix Spotlight with Dave Hill: Dave Hill is one of the best there is and it's important to support our loved ones when they do big time club shows. I'll be there and urge anybody with the means to do the same. He will dominate.