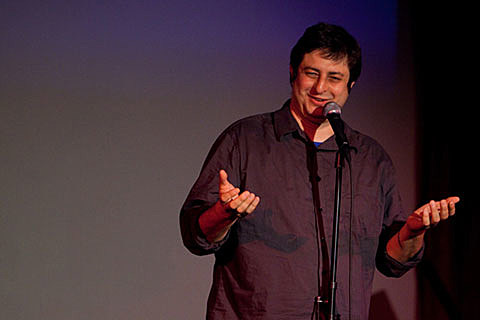 Ladies and gentlemen, we are approaching that time of year when I feel so oppressed and destroyed by the heat and humidity that I can't help but contemplate suicide knowing that I must endure this for many many many more weeks. As the sweat and grease springs forth from every pore of my body... as the sweat that begins at the back of my neck rolls its way south and converges with my back sweat and picks up momentum and girth as the sweaty tidal wave approaches my butt-crack... as I wince through this every day I think, "Dead people don't have to deal with this. It must be much cooler and shadier being entombed." (it's DEFINITELY cooler being in the band Entombed). People migrate to the beach not just to enjoy the sun and the water; they do so to escape the revolting sight of people like me panting and sweating through our clothing and the sheer lack of comfort we exude. It is at this point in the calendar year that I feel my lowest and need a serious and somewhat sustained pick-me-up. Thankfully, the fine folks at Creaghead & Company have a pile of comedic fare for me to ingest in the coming weeks that will hopefully keep me from the edge. It will do nothing for my perpetual moisture and shininess, but it'll make life more tolerable!

For those of you not in the know, Creaghead & Company is a small, mom and pop outfit from Brooklyn that puts together some seriously rad music and comedy events. You may not have known it, but Creaghead & Company was/is behind events and tours such as Pretty Good Friends (a weekly comedy show at Union Hall hosted by Eugene Mirman) (there was also a PGF tour that featured Mirman, Reggie Watts, and Kumail Nanjiani), The Eugene Mirman Comedy Festival, Heart of Darkness (brain child of Greg Barris), Marking Out (hosted by Matt McCarthy), and more. The shows C&Co put together aren't just standard stand-up fare. Each and ever yone of these shows DO feature some of the best minds in comedy currently drawing breath. 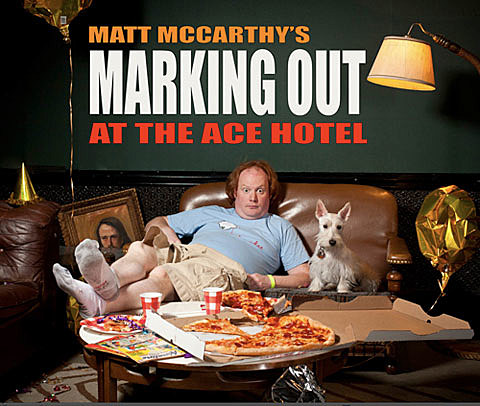 A more elaborate listing of their upcoming events are listed below, but allow me to take time out of MY busy day and give YOU a quick de-briefing (not the underwear kind) of what to expect in the coming days/weeks. The fun starts, like, soon... as in, like, Monday July 11th when Matt McCarthy's show Marking Out hits the Ace Hotel with guests including Michael Showalter, Joe Mande, Adam Lowitt, and musical guest Toys & Tiny Instruments. For the record, McCarthy is an absolute comedic force. Sort of like the real Klaus Kinski, only hilarious and completely different looking. Or maybe like the Minor Threat of comedy where you want to be up front gnashing your teeth and pumping your fist with him, but instead reel it in and respectfully listen while he does his thing. One of my favorites in the biz.

Marking Out is at 8pm which means you can probably catch it before Whiplash, which, like every Monday night, starts at 11pm at UCB.

Then on Wednesday July 13th you can catch Tom Shillue's FunnyStory.biz at Caroline's On Broadway. The show is hosted by Klaus favorite Tom Shillue and features Kurt Braunohler, Rich Vos, Swords, and John Flynn. Yes, it's at Carolines but it's only 10 bucks. And as side note, I know Caroline's gets a lot of shit for being a corporate Time's Square tourist venue, but they have made a serious effort lately to have $5 shows, one of which is hosted by the great Joe Mande. So give 'em a break. You pompous shrill.

Then on Saturday July 16th you can catch Heart of Darkness at Union Hall. Hosted by Greg Barris, Heart of Darkness is waaayyyy more than a stand up revue. I spoke about it in my little corner of the internet, but to sum:

"It is an incorporative show," explains the project's charismatic creator, 28-year-old comedian Greg Barris, who will also take the stage. "The band and the comics will all be performing together, the audience will be involved, special guests will be involved--the whole way through. And people's sins will be forgiven."

This particular episode featuresJaneane Garofalo, John F. O'Donnell, BV favorite Reggie Watts, and MIND WARRIOR: from the Behavioral Pharmacology Research Unit at Johns Hopkins University - Matthew W. Johnson, Ph.D. This is something you experience, not passively watch. I really urge you to see this. If I had my way this show would happen nightly.

Also, you might want to make sure that on July 29th you get your cut-off wearing ass over to the Williamsburg Waterfront for Creaghead & Co. related event Pretty Good Friends featuring Eugene Mirman, Patton Oswalt, Todd Barry, Kristen Schaal, and They Might Be Giants. The setting is beautiful, the event is free, and you deserve a good laugh. Trust me, you do.

More details on all these shows below... 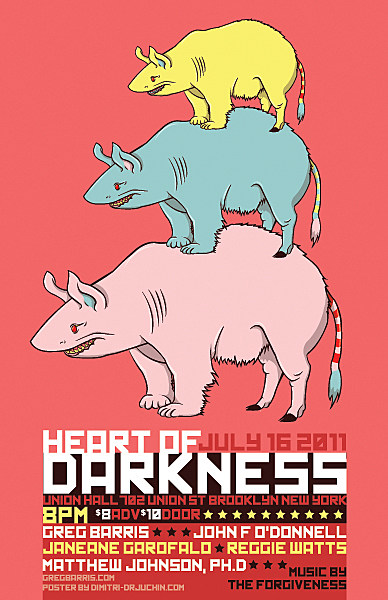 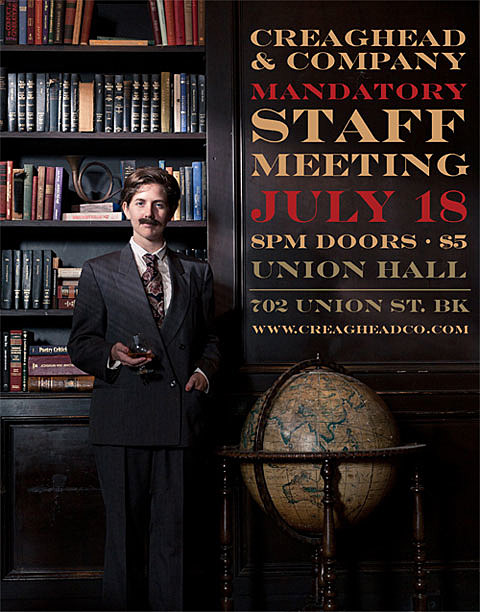