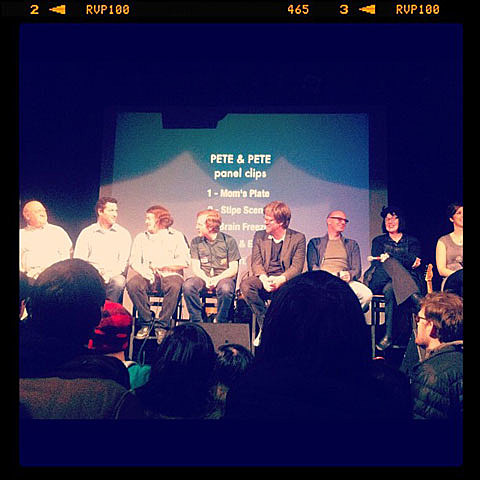 Hey guys. So, lookit, you're about to ingest a lot of comedy data in a moment. But it's just the tip of the NYC comedy iceberg. No, it's less than the tip. It's a piece of dandruff that sailed from an Arctic explorer's head and settled on the tip of the iceberg. I don't have the time and you don't have the attention span to handle an entire survey of the NYC scene right now. What follows is a brief glimpse into some cool goings on in the coming weeks. Take it with a grain of dandruff.

First thing's first. Rob Delaney added a fourth NYC show, but you knew that. Moving on...

Did you miss the two Adventures of Pete & Pete reunion shows that happened at the Bowery Ballroom on February 24th? Bummer, right? Well, unfortunately the show I'm about to tell you about is already sold out, but where there's a will, there's a way (and that way could possibly include standby tix). Get a load of this. The great Kurt Braunohler has a late night talk show at The Pit called Night of the Living with Kurt Braunohler. The next installment of this show happens on Friday March 9th and features guest Mike Maronna (Pete) and Danny Tamberelli (Pete)! It's a fun sized, mini-reunion just for you! Also, Wyatt Cenac (Daily Show) will be there and a surprise musical guest who I am unable to mention, but whom we love and idolize here at BV headquarters (an internet cafe)! Hint, it is a man whose name may or may not rhyme with 'bread'.

Thursday March 8th marks the return of Tom Shillue's story-telling-centric show Funny Story to the hallowed halls of UCB East. This time he will have guests Amine Zaitzeff (owner of Zaitzeff Burger), Mike Albo, the great Margot Leitman, and Stephen Gevedon. A super-diverse and well curated line-up. Show is at 7:30pm, tix are on sale. 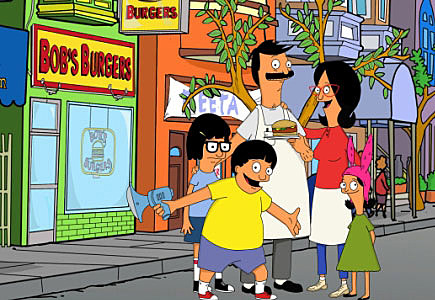 Speaking of burgers, Bob's Burgers is my favorite animated series on the TV and I was thrilled when it was (rightfully) renewed for another season (which premiers THIS Sunday March 11th on Fox). The casting a so fucking impeccable; H. Jon Benjamin, Eugene Mirman, Kristen Schaal, Larry Murphy, John Roberts, Dan Mintz, Andy Kindler as well as guests like Jon Glaser. Holy! Well get a load of THIS shit. On Friday March 9th you can see the CAST OF BOB's BURGERS LIVE AT THE BELL HOUSE!! And IT'S FREE. I am not an all-caps kind of guy, but that pronouncement certainly merited such action. OK, full disclosure, the Bell House show doesn't feature the entire cast I listed above. The show will feature Jon Benjamin, Kristen Schaal, Eugene Mirman, and Larry Murphy doing funnies and also previewing clips from the next season. You can only get in with a wristband, and those will be distributed starting at 5:00pm. So, wristbands at 5pm, doors at 8pm, show sometime after that. 21+. Sorry, junior.

While I'm on the subject of TV-related comedy, NYU's Skirball Center will play host to John Oliver's New York Stand-Up Show from March 10th through March 12th. The show, being taped for Comedy Central, will include sets by David O'Doherty, Hannibal Buress, Wyatt Cenac, Dana Gould, Michael Ian Black, Marc Maron, and a shit-ton of rising stars from with the stand-up world. You can totally get in to these things for free, but you gotta head on over to The Blacklist NYC and get yourself situated. And for the record... as far as people who put together audiences for tapings, The Blacklist is pretty tops. Very well managed, never confusing, very organized. Totally rad. Just saying.

Next Thursday, March 12th, Symphony Space will play host to an incredible comedy event called Uptown Showdown: Comedy Debate Series. This is not the first time Symphony Space has hosted this show, and I am wicked pissed at myself for not mentioning it to you people prior to earlier installments.

Uptown ShowDown is a comedy debate series that tackles some of the most important issues of our time, such as which decade was the coolest-the eighties or the nineties, is cake really better than pie and who would win in a showdown pirates or ninjas? Forget about school reform and health care, these issues, heatedly argued by some of the funniest, smartest, intensely wacky creative thinkers around, are the topics that keep us awake at night....in a good way. Past Performers include Michael Showalter, Leo Allen, Dave Hill, Jessi Klein, Julie Klausner, Andrea Rosen, A.D. Miles and more.

Next week's show will have Michael Ian Black and friends facing off with The talent Show's Elna Baker and Kevin Townley on the subject of Fashion vs. Comfort. Tom Shillue will host the festivities. Following the event, Mr. Ian Black will read from his new memoir You're Not Doing It Right: Tales of Marriage, Sex, Death, and Other Humiliations. He'll also sign your copy. I wish I could tell you how funny or awful this book is but I never got a galley copy because I am chopped liver or something. Tickets are on sale now, and I am also giving away a pair AND a copy of Michael Ian Black's book! Instructions below.

The next installment of the mind-blowing experience known as Heart of Darkness will take place on Saturday March 17th at Union Hall. This time around, host Greg Barris will be joined by Joe Mande, Dave Hill, and more special guests that I shan't announce but are no doubt worthy of your attention. My thoughts? Get your tickets in advance, you.

...about stolen meat, animal attacks, young love, death, naked people, clergymen, rock 'n' roll, irritable Canadians, and prison, you have just hit a street called Easy because my book talks about all that stuff and a bunch of other stuff, too.

I am nobody's shill and I wouldn't be saying this if it wasn't the Cod's honest truth; this book is absolutely impossible to put down. It is so funny and well written that I simply could not put it down. Pre-order it now, then forget you pre-ordered it, so then one day it shows up in your mailbox and you're all "Ha. Dave Hill's done it again."

And speaking of Joe Mande, he has a ton of upcoming dates all over the Northeast. Check out his tour schedule below. 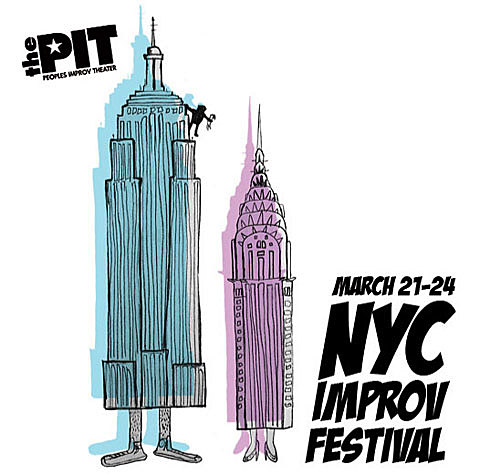 And now, before I hang it up for the day, I am happy to report that The PIT is going to unleash its first ever NYC Improv Festival! The NYC Improv Festival will take place from March 21st to March 24th at Peoples Improv Theater and feature OVER 40 improv troupes as well as workshops. A TON of the shows are free, and some require tickets. You can also buy a festival pass for next to nothing that will get you into all the shows. I also have two UNLIMITED festival passes to give away. Instructions on how to win them are down there.

Joe dates and contests below...

----
For a chance at winning a pair of tickets to see NYC Improv Festival at The Pit: either tweet something that includes both @BVComedy AND "NYC Improv Festival" in the tweet or send an email to BVCONTESTS@HOTMAIL.COM with the subject line "NYC Improv Festival". Include your first and last name in the email. We'll pick winners at random and contact them with more details. If you enter by email, it will not be shared with anyone else.

For a chance at winning a pair of tickets to see UptownShowDown at Symphony Space: either tweet something that includes both @BVComedy AND "Uptown Showdown" in the tweet or send an email to BVCONTESTS@HOTMAIL.COM with the subject line "Uptown Showdown". Include your first and last name in the email. We'll pick winners at random and contact them with more details. If you enter by email, it will not be shared with anyone else.