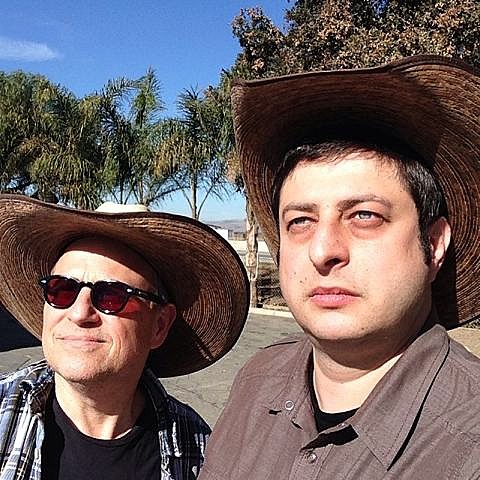 Ladies and germs, today we find ourselves on the brink of Thanksgiving and a Nor'easter. I can't wait to see which one will be a bigger disaster for me personally. Regardless, before you pack your backpacks or your hobo-bandanas that you'll hang from the end of a stick and head out to see your friends and family, here's a quick comedy round up for you to enjoy.

Speaking of Eugene Mirman, NYC semi-recurring-ish comedy staple Pretty Good Friends has a holiday show coming up at the Bell House on Tuesday December 17 and the announced guests so far include Eugene Mirman and the great Daniel Kitson. Last weekend Daniel Kitson began yet another massive residency St. Ann's Warehouse that is set to wrap-up on December 21 2013. A lot of those shows are sold out while a handful of others only have a handful of seats left, so get tickets now. Eugene Mirman also has some December dates with Klaus Hero Kurt Braunohler. Those are listed below.

And for Cod's sake, let's not forget that Union Hall is still a force to be reckoned with in terms of small-room huge-talent comedy bookings. Every Sunday night Creaghead and Company takes over the room and for a measly $7 brings us some of the biggest names and freshest talent in the biz. Tickets are only available at the door and the room fills up quick, but if you want to see comedians before they become superstars or comedians who can sell out places like Town Hall and Carnegie Hall, this is the place to be.

One show on the Union Hall calendar that I am really looking forward to is the release party for comedy photography book Funny Business by the great Seth Olenick which is happening on December 21. The shindig will feature Seth Olenick, Brooke Van Poppelen, Max Silvestri, and "very special guests". While there, you will also have the opportunity to purchase the book. If you recall, we mentioned Seth's Kickstarter campaign back in February 2013 and I was so happy to see that he actually exceeded his goal. This is an exceptionally solid body of work by a fantastic portrait photographer.

Manhattan venue Joe's Pub has been programming some comedy into the calendar lately too. John Roberts, viral video master and voice Linda on Bob's Burgers, will be headlining the venue on Sunday December 15.  Along with his many original characters, look for Roberts to bring his east coast everymom and star of the viral "Christmas Tree" videos "Margie" to life onstage. Tickets are on sale.

And while we're on the subject of Joe's Pub, tonight (11/26) the great Julie Klausner wraps up the 5-night run of her show TOO GAY FOR BROOKLYN: An Evening of Cabaret with Julie Klausner. For tonight's evening of music and comedic banter, Julie welcomes Ted Leo. A handful of tickets are available.

Julie's incredible podcast How Was Your Week recently featured American musician, feminist activist, and punk zine writer Kathleen Hanna and is something I must insist you listen to immediately. Kathleen is the subject of a new documentary called The Punk Singer which begins its theatrical rollout on Friday (11/29). New Yorkers can catch the film -- which also includes appearances from Joan Jett, Carrie Brownstein, Tavi Gevinson, Adam Horovitz, Kim Gordon, and Kathryn Wilcox --  at Nitehawk Cinema or the IFC Center. Hanna will appear in person for a Q&A after the 2:00pm screening at Nitehawk on Saturday November 30 and tickets are on sale. Click here for a full list of screening dates and cities.

Eugene Mirman dates are listed, along with John Roberts' "Christmas Tree" video, below...