Klaus is back, and just in time for April Fool's. Neutral Milk Hotel reunion pictures at the end of this post..... 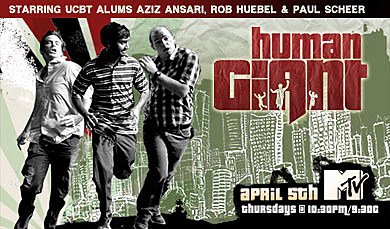 UPCOMING IN NYC & ON TV

Go check out Michael Showalter, Eugene Mirman, Todd Barry, and Pete Holmes tonight at Union Hall in Brooklyn (April 1, 2007). If you missed it, don't worry - Michael, Eugene and guests will be back next week.

Human Giant premieres on MTV this Thursday April 5th. 'Starting back up April 9th - Human Giant will be test screening new shorts at Crash Test at the UCB Theatre in New York on Mondays at 11.' Check out their feature in NY Magazine. Make reservations.

NYC sketch comedians The Whitest Kids You Know are on TV too. Have you seen their show on Fuse yet? Have you seen them live? They're at Pianos on the Lower East Side every Sunday night, and it's free.

AND OF COURSE THERE WAS SXSW

Comedy was everywhere at SXSW this year. There was David Cross' big shindig.... 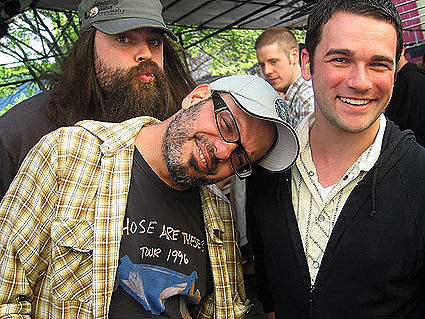 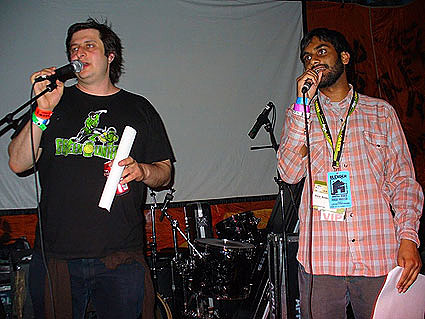 ...And even a bit of Human Giant at the Brooklyn Vegan & Le Tigre sponsored NY2LON party.... 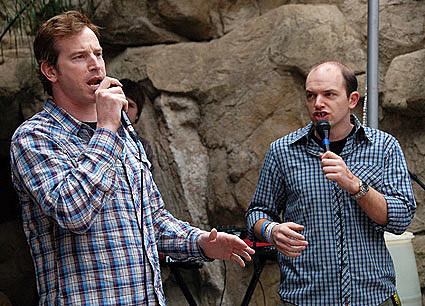 Aziz, Paul and Rob would have made more than two brief appearances at the NY2LON party, but Patton Oswalt ended up calling out sick from all of SXSW, and Aziz was offered the opportunity to take over as host of the competing Mess With Texas day party. Naturally he took it, and though his intentions were good, he ended up having trouble finding the time to run back and forth from party to party.

SXSW also saw Cross and Ansari playing Guitar Hero, Michael Showalter posing with girls, and Cross and Zach Galifianakis sitting on a panel where they discussed "Comedy on the Music Circuit", and where Cross dissed indie rockers and then apparently left half way through the panel (to get back to his own party I assume)? Read a review of the Mess with Texas party here, and read some SXSW comedy interviews at CC Insider, and check out the pornographic (NSFW) Human Giant pics at the end of this post.

Hey, whatever happened to Eugene Mirman's Village Voice blog? I used to love that thing.

David Cross is in the most recent episode of the Michael Showalter Showalter. In it, he gets outbid on an apartment in Park Slope, discusses being ravaged by poison ivy, and flatly refuses to have any involvement in Michael Showalter's latest screenplay.

Who got Ricky Gervais tickets? 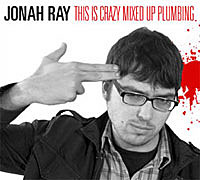 On March 27, 2007 Aspecialthing Records unleashed their second release; Jonah Ray's This Crazy Mixed Up Plumbing. Unlike their first release (the fucking hilarious Jen Kirkman CD Self Help), this bad boy is being released as a 7-inch. Vinyl baby.

Jonah also got a new camera and took pictures in New York and SxSW. Demetri, Eugene, Kristen, Les Savy Fav, Aziz, Glaser... simply everyone was there. You can also see his brilliance on Super Deluxe.

Patton Oswalt had an article in the New York Times Magazine on 3/25/07. READ IT. Patton will be at Coachella on 4/27 with the Comedians of Comedy.

Henry from Chunklet sent out a myspace bulletin the other day alerting people of an immense treasure trove of Mitch Hedberg downloads. This is a great resource for die-hard fans of the late, great comedian and people who just want to get acquainted with his work.

Chunklet was at SxSW for Mess With Texas as well as a panel discussion. Read about their experiences HERE and HERE. Don't forget to read the comments. Is SxSW only good in theory?

On 3/22/07 Invite Them Up co-host Bobby Tisdale began a new monthly variety show at Carolines called Llama Toe with Bobby and Friends. The show is co-hosted by Reggie Watts and his band The Check Spots. The premiere episode featured Leo Allen, Kristen Schaal, comedy rap duo Cracked Out (Bret Gelman and Jon Daly), Chelsea Peretti, and sketch group Hot Sauce. The next episode is on 4/12/07 and is a mere $8.00 which, even with a two item minimum, is quite cheap for Caroline's. You can also see Bobby on Super Deluxe.

If you were unable to attend Tim & Eric's Awesome Tour, you should check out the Tour Diary. Their Knitting Factory show, though gut-bustingly hilarious, was such a hot, sweaty, crowded mess, that I cherish the tour diary more than the actual live experience.

Inside Joke is leaving the comfort of UCB for one of their biggest shows yet. On Monday April 9th, at a location that will be announced in your reservation confirmation e-mail, there will be an advance screening of the new Rogue Pictures film Hot Fuzz, followed by a conversation with the writers, director, and co-stars Simon Pegg, Nick Frost, and Edgar Wright, the same crew behind Shaun of the Dead and Spaced. Go HERE for details and reservation info.

Some small-time social networking hub called Myspace (heard of it?) has started a thing called Myspace Secret Comedy. The intent of this is to allow people to see big-time comedians in small-time venues for free. They are off to a terrible start as their first show features the unfunny joke thief Carlos Mencia.

There's a great new I Love The Movies at bobanddavid.com.

A CAVALCADE OF INTERVIEWS!
* some are audio, some you have to read, all are awesome. 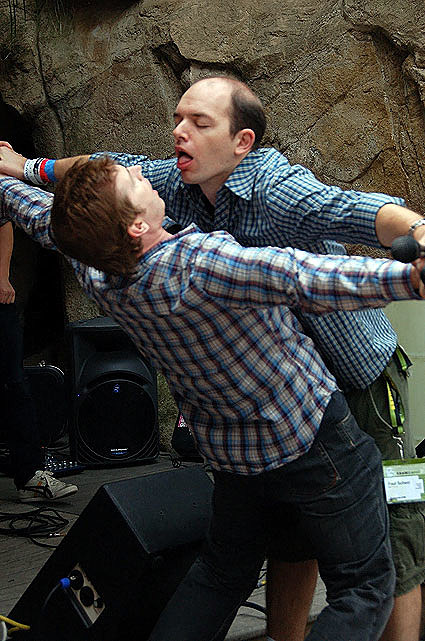 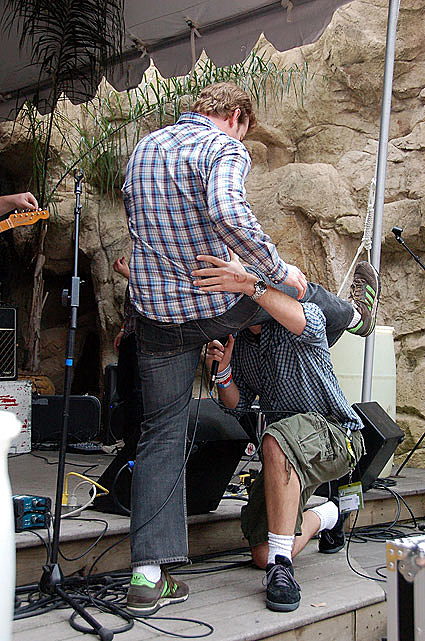 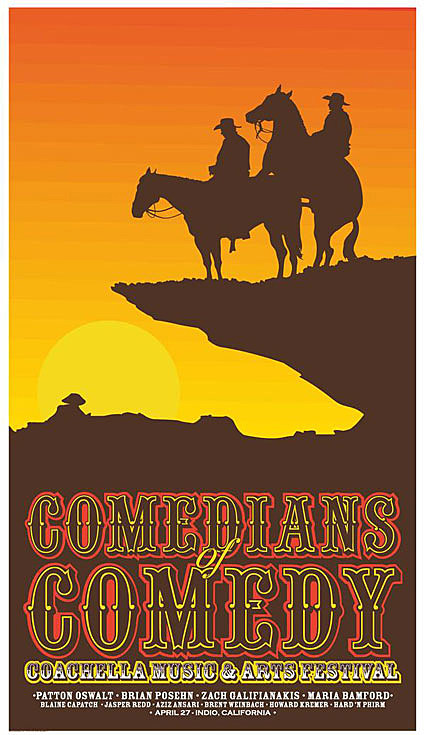 and last, but not least, someone forwarded me this....