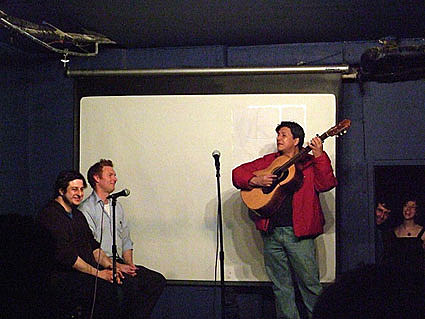 Jon Benjamin paid a guy to serenade Eug and Bobby for the Invite Them Up anniversary. Oliver and Schaal look on from the back room. (April 25, 2007)

I am also beyond giddy to report that HBO Video will be releasing Louis CK's live 1 hour special Shameless on June 26th, 2007. That's a Tuesday people. Shameless is CK's third HBO special, and further reinforces my opinion that he is easily one of the best comedians out there. He takes nauseatingly banal topics such as family life, childhood, and sex and riffs about them in such an unexpectedly blunt and graphic manner that you can't help but be drawn in. To celebrate this release, we are giving away TWO copies of Shameless to two lucky winners. Send an e-mail to BVCONTESTS@HOTMAIL.COM and tell us what comedian you think should really release a DVD ASAP. Two winners will be picked at random and notified. 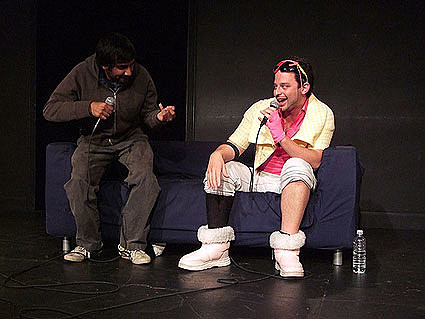 In other awesome comedy release news, AST Records has just released Paul F. Tompkins’ debut album, "Impersonal.” Recorded at the UCB Theater in LA, this album contains 45-minutes of Paul's best material harvested from a career spanning almost two decades. You can buy it directly from AST Records or get it at one of his zillion upcoming live apperances.

Speaking of Paul F. Tompkins, did anyone catch his apperance on The Best Show on WFMU with Tom Scharpling on June 12, 2007?

A heavily tattooed David Cross has been making the rounds in NYC recently (possibly boning up for his upcoming 100 Club shows in England). I missed his 6/10/07 show at The Green Room. I missed his appearance at Union Hall this past Sunday. However, I DID manage to check out the YouTube Show & Tell Show with Julie and Jackie at Mo Pitkins on June 11th. The show featured Amelie Gillette, Leo Allen, Jon Benjamin, David Cross, and your hostesses Julie and Jackie. The basic idea of the show is that the guests would show up with their favorite YouTube clips and essentially riff about them. For the most part, the clips were laughable and the commentary was funny. But David, though funny, didn't appear to dig the premise of the show; he had a more serious vibe to his bit. His main concern was that, more than just host silly clips of people wiping out and being dumb, YouTube (and the blogosphere itself) has become a place where people who really have nothing profound to say, can vaildate themselves by brodacasting their banal rants and accumulating 'subscribers'. While the other participants showed laugh out loud "look how stupid that person is!" type of stuff, David showed clips which reinforced his theory. A funny, yet heart-smart, evening.

Entertainer extraordinaire Reggie Watts recently started a weekly residency at Rififi. Full of Reggie's remarkable songs and stories, the Rififi website bills it as supertalented performer, faster than a speeding punchline, more powerful than a steaming latte, able to leap tall non-sequiturs in a single bound... reggie watts will shock and amaze you with his virtuoso performances and superhuman ability with a sampler!! I missed the first one, because I'm a douche, but Alive From New York was there.