Another new weekly feature! Please help me welcome NYC comedy enthusiast Klaus Kinski to BrooklynVegan. Klaus (not to be confused with the deceased german actor) will bring us a weekly column full of comedy news, gossip, events (NYC, California, Iceland, etc)....and even more. I'm sure we'll fine tune this thing as we go along, but for now here's his first post... 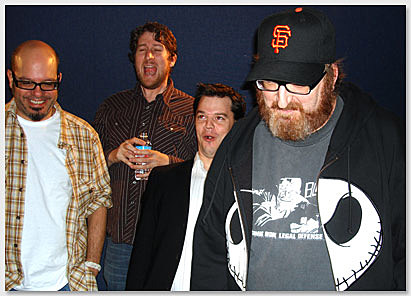 I know the holidays are over, but it's never to late to enjoy The Town That Came "This Close" to Forgetting What Day Christmas Came On featuring Bob Odenkirk, Plug Awards host David Cross, Brian Posehn, B.J.Porter, and Scott Aukerman.

And continuing with the holiday theme... an obsessive Patton Oswalt fan bought his friend every single item mentioned on Feelin Kinda Patton for Christmas. He was also kind enough to document this overwhelming gift on Flickr. More at Aspecialthing.

It's no Dick in a Box, but the recently discovered video of Kevin Federline dancing in an episode of the prematurely cancelled Late World With Zach is still worth a watch. Star-of-the-show Zach Galifianakis is touring all over the place soon. Tickets are on sale for his reserved seating February 24th performance at NYC's Irving Plaza.

The Apiary noticed that the Human Giant website is under construction. Is this a sign that the MTV brainchild of Aziz Ansari, Rob Huebel, Paul Sheer, and Jason Woliner might be close to completion? In the meantime, catch the guys every Thursday in January at UCB LA.

Invite Them Up is off this week, but there are still plenty of other comedy shows happening in NYC....

LA based comic Paul F. Tompkins has been working New York quite a bit recently. He did a Christmas show at Town Hall on 12/12 with 80's legend Aimee Mann and performed at the Invite Them Up show at Bowery Ballroom on 12/14. Next up --> a number of dates at the newest NYC comedy mega-venue Comix. That's five shows on January 4th, 5th, and 6th, and you can get tickets here. John Mulaney is also on the bill. Comix is pricier than what I'm usually willing to pay, but PFT is worth it. Best Week Ever agrees.

Mike Birbiglia will be performing his signature show Mike Birbiglia's Secret Public Journal Live at Mo Pitkins on Thursday January 4th. This is going to be such a great show that may even include some surpsise guests. I highly recommend getting tickets in advance. But, hey, if you don't like Birbigs, maybe you should check out Sweet at the Slipper Room instead (SW corner of Orchard and Stanton). Thursday's show features Seth Herzog, Michael Showalter, Bryan Callen, Pete Holmes & TJ Miller, and John Veiner.

If you've never seen Fabrice Fabrice (Nick Kroll), then you've been missing out on one of the most profound live events this world has to offer. He will be at the UCB Theater on Friday 1/5/07, pink moon boots and all. For more info and reservations, visit the UCB theater online box office.

Moonwork Presents, one of New York City's best keep monthly comedy and music showcases, rings in 2007 with a spectacular show on Saturday 1/6/07. Todd Barry, Langhorne Slim, Tom Shillue, Andres du Bouchet, Jane Borden, and Eric Slovin are all slated to perform. A cover charge of $20.00 gets you into the show as well as all the beer you can drink. Info and directions here.

Every Saturday in January at 7:30pm, UCB Theater NY will be hosting a long-form improv show called Let's Have A Ball. The line up features Kay Cannon, Scott Adsit, Brian Stack, Christina Gausas, Peter Gwinn and Laura Krafft with special guests Becky Drysdale and Brian McCann. These shows promise to be some of the best improv around. I strongly suggest making advanced reservations.

The Sixth Annual SF Sketchfest:The San Francisco Comedy Festival (Jan 11-28) has announced its 2007 line-up and schedule and it's enough to make any comedy nerd keel over with excitement. Highlights of the show include a Paul Reubens tribute complete with a special live in-conversation with Ben Fong-Torres. Also featured is a Stella reunion featuring Michael Ian Black, Michael Showalter, and David Wain as well as a Mitch Hedberg tribute. Other showcases include Comedy Death Ray, A.S.S.S.S.C.A.T., Invite Them Up, The Red Wine Boys, and the Doug Benson Interruption. The list of comedians on hand is insane and features David Cross, Bob Odenkirk, Maria Bamford, Paul F. Tompkins, Doug Benson, Todd Glass, Todd Barry, Jon Benjamin, Morgan Murphy, Eugene Mirman, and zillions more. Shows take place throughout the city. For tickets, visit this ticketweb link, with tickets to some other shows here and here. More info at the official site, and at Aspecialthing.

RIP Sketchartists.net.....love for The Sound of Young America....Finally, a comedy fanzine that I don’t have to log into........Hitler comedy to debut in Germany???.....Al Sharpton dating a white woman???....good night. 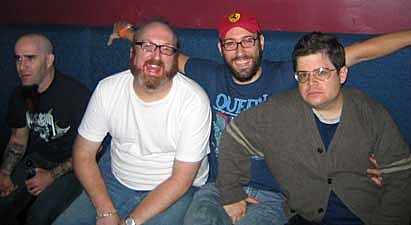 When not blogging, Klaus can be found working at a local museum, maintaining the Invite Them Up MySpace page for Bobby Tisdale & Eugene Mirman, and enjoying live music and comedy somewhere in and around NYC.