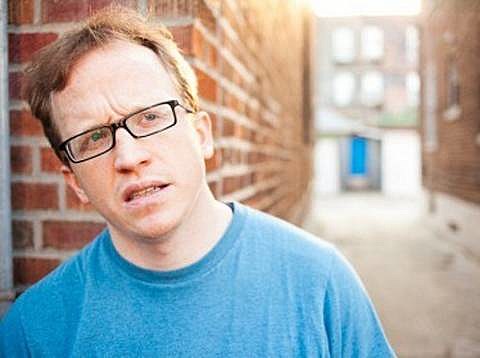 Because I have a terrible memory and personal tastes that change from week to week, coming up with a "Best of" list spanning an entire year is absolutely impossible. And the term "Best of" sounds too goddamned dogmatic to be taken very seriously. I only like lists when they are silly and light like "Top Ten Funniest Farts" or something of that nature. And anyway, the reality is that taste is subjective; a concept which you crotchety commenters can't seem to get through your thick skulls. Especially when it comes to comedy. So rather than give you a "Top 10 Funniest Comedians of 2012" list, what follows is "Though There Are Certainly Others, Here Are 10 Mostly Local Comedians Who Klaus Kinski Really Enjoyed in 2012 In No Particular Order, Really," below...

CHRIS GETHARD: If you put a knife to my throat and forced me to prioritize this list of great comedians, Chris Gethard would most certainly be in the top 2. I've caught him many times in many different rooms over the years, but this year he seemed to really blow up and his rise is overdue and well-deserved. Chris has a wildly popular show on Manhattan cable access every Wednesday at 11:00pm called The Chris Gethard Show which you can watch online or on your TV. The show is insane; it's a game show, talk show, variety show, batshit crazy anything goes show. And it happens every week. His book A Bad Idea I Am About to Do came out in January of this year and I could not put the thing down. Chris is one our generation's best story tellers on paper and in person. The book is currently being developed into a series for IFC. He is such a funny, brilliant, supremely talented, and kind fellow whose career I will champion forever. Join me, won't you?

SETH HERZOG: Seth's inclusion on this list was a no-brainer. Not only is he one of the funniest people I've ever seen, but his contributions in keeping the NYC comedy scene alive, eclectic, and flourishing are without an equal. This city is teeming with weekly comedy shows, but this city also has a habit of making it extremely difficult for shows to last, or at least stay in the same venue for more than a year or two. Yet, for the past 8 years Seth's iconic weekly show Sweet has served as a constant exercise yard for new talent, established talent, and everything in between. From the famous, to the not famous, to the "holy shit this guy's/gal's gonna be famous," Seth and his show are the virtual comedic heart of NYC's virtual comedic circulatory system.

JAMES ADOMIAN: "HOLY. SHIT." - Me after every James Adomian performance I've ever seen. I had heard so much about James Adomian for years from my LA friends (ie, people I follow on facebook and twitter who happen to live in LA and who I don't really even know) (I have no friends, really) (Unlikable=Me). All I would hear is that his stand-up is brilliant, bombastic, and an assault of high level comedic energy. And though I'd seen a few of his bits online, nothing really compares to being in the same room as him as he is performing. His comedy seems completely off-the-cuff and hardly premeditated. It is fast, jumps from one place to another, and is somehow peppered with some spot on impressions of people like Paul Giamatti, Philip Seymour Hoffman, Sam Elliott, George W., and more. It is truly astounding how his performances evolve and now that he seems to have settled in NYC your chances of experiencing this phenomenon are pretty good.

TOM SHILLUE: I am not one of BV's most voluminous contributors, but if you know my articles then you know how much I like the great Tom Shillue. Tom approaches comedy as more of a monologist than a stand-up guy. He's a storyteller. A very FUNNY storyteller. With Tom, it more about the trip (the story) than the destination (the punch line) and his material always manages to be clean and super articulate. He is one of the brightest stars in NYC comedy. Among other things, right now Tom is in the midst of his 12-Albums-In-12-Months project wherein he released an album last November and will continue to release a new album every month for a year. Keep your eyes on his website to stay on top of his live appearances and, of course, his 12-Albums-In-12-Months project.

BRENT SULLIVAN: Brent is one of my favorite local comedians, though I think he's moving out west like any day now. I think Brent is profanely "under-known" and that the masses should really be hip to this guy by now. Besides being legitimately freaking hilarious, one of the things I like about Brent is his demeanor on stage. Because he's a bit on the quiet side and his pacing is measured, his jokes end up packing a seriously unexpected and profound punch. Though a great deal of his comedy revolves around his being gay and gay themes, he never trivializes or caricatures homosexuality for a cheap or easy laugh. I caught his one mane show Profiles in Cowardice at the UCB theater a while back and it was brilliant. As the UCB Site says, Profiles "is an hilarious multimedia expose into the psychology behind comedian Brent Sullivan's series of fake social networking profiles that he uses to communicate with people he cannot and will not communicate with otherwise (like the white rapper from his high school, Neo-Nazis and super hot dudes from Belarus)". His material is insanely strong incredibly consistent. If the rumors are true and he is leaving NYC, then it's obviously for greener pastures and I have no doubt it's a move that will propel him further and to a larger audience. At least I hope so. Catch him Friday December 21st at Union Pool with Riley Soloner, Joe Pera, and more for an end of the world comedy show.

EMILY HELLER: I am way late to the Emily Heller appreciation party. I caught her for the first time towards the end of this summer and she blew my mind. Saw her a few times since and she delivered the same, staggering results. She is the best. You may have seen her on the third season of John Oliver's New York Stand Up Show on Comedy Central. Or maybe you caught her at one of a million local comedy shows she's been a part of. If you haven't you must. Emily co-hosts the podcast Baby Geniuses with Lisa Hanawalt, as well as popular stand up showcases The Afterlife at the Sidewalk Cafe and Fresh Out! at UCB East. She performs in NYC A LOT, so follow her Tumblr and keep mental notes of her many live dates!

MARK NORMAND: Mark fell onto my radar in a pretty weird and pretty lame way. For almost an entire year, every time I got a comedy related Facebook invite, there was Mark, front and center in the "Attending" column. Every. Single. Time. For some irrational reason I started to get annoyed by this. Who the fuck is this guy? How can he possibly go to every goddamned show?! Then, one day, I am at a comedy show when, lo and behold, who gets announced as the next comedian? None other than Mark Normand. There he was. In the flesh. And he was incredible. A short set later and I was a fan. Since then I have seen him a million times and each time he's been fantastic. The man is a pro. His material always seems really fleshed out and impeccably delivered, whether he's in a dumpy basement room or a larger theater doing a live TV taping for Comedy Central. You can find Mark performing literally every night of the week here in NYC, so get in sync with his schedule and check him out!

NICK TURNER: Back in September 2012, I wrote an article that mentioned that Sarah Silverman had a show coming up at BAM and a commenter wrote, "Too bad you didn't mention the funniest comedian at BAM tomorrow night being the host Nick Turner." Normally I am all "Ah, eff you buddy" but you know what? Commenter "JT" was absolutely right. I totally should have made more of an effort to get Nick Turner on the minds of BV readers at the time. Because Nick Turner is absolutely incredible and one of the best comics in the scene these days. I adore this guy's energy. He's loud with a super-expressive face and body language. Nick is a hard workin' dude and can be seen all over NYC. Want dates? There's a Tumblr for that.

JOE MANDE: Joe Mande, who gave us a Top 10 a few weeks ago, has been a favorite of mine and will continue to be a favorite of mine probably unless he does something astoundingly and embarrassingly illegal. His departure to LA left a huge gap in the NYC comedy scene. His recurring live show Totally J/K that he used to do with the also supremely funny Noah Garfinkel was one of the funnest and funniest shows you could ever imagine. His twitter feed amuses me to no end. And as a stand-up comedian, he is one of the best and brightest in these United States. As a young dude with brains to spare, the sky is the limit for Joe and it is inevitable that his becoming a household name is only a short matter of time away.