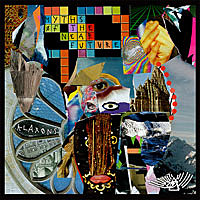 The latest news with the Klaxons is that NME has gone ahead and overrated them again - a 9/10. I still like them, but I'm not sure their new album Myths of the Near Future (out March 27 here on "Geffen subsidiary DGC Records") is a nine. I can't even say for sure if the Klaxons are "the most thrilling and visionary band Britain’s had in more than a decade". Plus, their live show wasn't that amazing. This is NOT "BACKLASH" though - just sayin' NME is a bit cuckoo. Here's what Idolator has to say:

If you've ever wondered just how the overheated British bible maintains its status as an innovator in pumping up bands until they're ready to pop, this Alex Miller write-up--which gave the album a 9 out of 10--is a pretty good primer; not only does it name-drop Damon Albarn, Aleister Crowley, and Buzz Aldrin, it tells both history and trustafarians to fuck off.

I'll probably still go see the band again when they get here - especially since I'll know their songs a lot better than last time.

Klaxons are touring in April before Coachella. They play Bowery Ballroom (April 10) and Studio B (April 11). Tickets for Bowery go on sale at noon. All dates below...