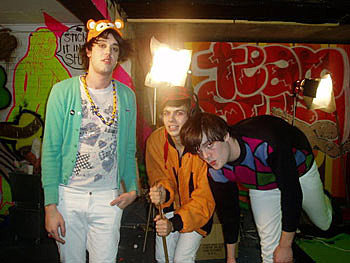 As first pointed out by Jackson, the UK's Klaxons are coming to NYC this week. Though described by themselves as "Screamo / Happy Hardcre / Pop", NME has dubbed them "new rave trailblazers" - which is at least consistent with the thoughts of early-90s-Moby-rave that immediately popped into my head when I first heard "Atlantis to Interzone" playing on their MySpace page. Pitchfork reviewed the track "Gravitys Rainbow" today, compared them to Bloc Party, and said they're "not sure it needs its own genre just yet". I can't stand the third track on their MySpace called "The Bouncer Demo", but I still (possibly naively) have somewhat high hopes of fun-to-be-had at the following two shows...

Here's a video of them performing to a much bigger crowd than Midway holds. The rest of their tour dates are on different continents.