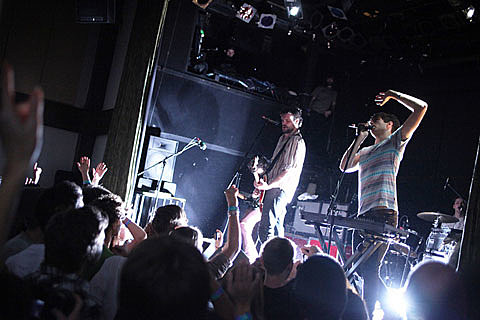 "Flashover" indeed. About three seconds into that song, which opened the Klaxons' set at Music Hall of Williamsburg last night (9/22), the megawatt strobes they had aimed at the crowd started going off. I was seeing spots for the rest of the evening. I think I still am. Do not bring your epileptic dog to see the Klaxons.

It was the last of three concerts the London band played in New New York (the other two were at Bowery Ballroom and Maxwell's, and they played a show in DC between Bowery and Music Hall). Apart from the cat astronaut cover art, the band's new album Surfing the Void hasn't gotten the attention their 2007 debut did. Despite this, Klaxons clearly still have a lot of fans and while MHoW was only about three-fourths full, those who were there were very into it, ready to dance, mosh, throw their hands in the air and sing along -- even to the new stuff.

Me? I was a big fan of Myths of the Near Future but I haven't really gotten into Surfing the Void which hit U.S. stores this week. Mostly I think due to the sound of Ross Robinson's overdriven, steely production. It's a little shrill to my ears. In the live setting, though, the songs sound more obviously Klaxons-ish and has me going back to the album today. Especially for the funky, syncopated "Twin Flames" which was my favorite of the new material they played. "Venusia," came off well too, as did single "Echoes."

The songs from the first album still got the biggest reaction -- "It's Not Over Yet," "Golden Skans," "Two Receivers" and "Gravity's Rainbow" all still sounded great. But it was their, ahem, nu-rave classic "Atlantis to the Interzone" which closed the show and truly sent the crowd into fits. Or maybe it was the strobes.

The band continues their US tour in Boston on Friday. All tour dates below...